Why Villanova can't build an arena/stadium

Share All sharing options for: Why Villanova can't build an arena/stadium

Villanova's campus has always presented a beautiful panorama along Lancaster Avenue, but turn your head 180 degrees and all that you will see is an ugly parking lot. That parking lot has been the central focus of the university's latest expansion project, with dormitories, retail shops and a new performing arts center along the main concourse that would create a more eye-pleasing view on the other side of the road. Villanova would keep more students on campus in the plan, rather than having them live in apartments elsewhere along the Main Line.

Of course, the plan has not received the support of campus neighbors.

Villanova distributed a 16-page booklet to attendees at last night's Radnor Township Board of Commissioners meeting, describing the project and the $50.99 million economic impact the project would have on the local community. Local residents filled the town hall meeting for the Villanova presentation.

Typical was a version of "Thank you for the presentation. It’s great and I support it. But, it’s too tall, too narrow and too close to the road. The parking garage is on the wrong side of Rt. 30 and there will be a traffic back-up between 8 and 8:30 every morning," followed by, "Why do [students] need cars on campus if they are on campus?"

A big part of the discussion among officials was whether or not Villanova should include a pedestrian bridge or a tunnel to ease the flow of students crossing Lancaster Avenue — a valid discussion that should probably take place whether or not the greater project is constructed. 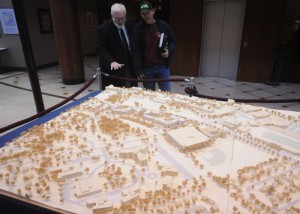 Radnor Township locals will oppose almost any building that Villanova wants to do. It won't matter what it is or what the positives are — the people of Radnor Township will always find the negatives. When Villanova was breaking ground on the new law school building, after all approvals were granted and permits issued, the university's neighbors were still trying to fight against its construction.

Without a doubt, Villanova will face the same opposition, or perhaps more, if they ever proposed building a 10,000-seat arena or a 40,000-seat stadium on campus. It won't matter how comprehensive the plan is, or whether the university accounts for everything from traffic to the impact of bright stadium lights on the community, someone will object.

There is no easy solution, either. Villanova either needs alumni and friends to buy homes in Radnor Township to flood the community with positive sentiments or a brand new campus in a more welcoming municipality far from the Main Line.

Neither is likely to happen.

For the foreseeable future, building projects on Villanova's Main Line campus or on any adjacent properties they acquire will be difficult or impossible to get off of the ground. That is the reality that the university has to live with and it is the reality that pushes some basketball games to the Wells Fargo Center and that is ultimately forcing football games to move to PPL Park in Chester.

Kevin Higgins: Asked for the school to commit to capping its student enrollment numbers.

Don Curley: Thinks the project has "great merit to it, planning wise," but would encourage traffic calming on Lancaster Avenue.

John Fisher: "I’m going to be looking for anything and everything you can do to reduce the impact on adjacent neighbors."

John Nagle: "I fundamentally like plan, but have a lot of concerns that need to be hashed out."

Jim Higgins: He said it looks like a wonderful project, so "What took you so long?" and strongly encouraged a pedestrian bridge over Lancaster Avenue.

Commissioner Elaine Paul Schaefer has recused herself from discussing or voting on the project because her husband’s company sells a small amount of athletic equipment to the school.

Patch.com also provided a video of the presentation and ensuing discussion. A formal plan will be submitted next month, accounting for some of the concerns raised this week.