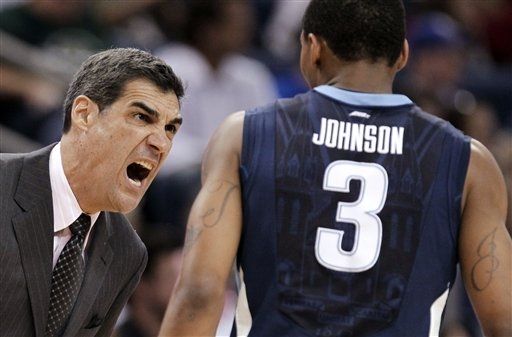 It was a tied game at 20 points each at the half in what was a game that most Big Ten fans would have thought was lacking offense. Villanova couldn't hang with the Bulls, however, and fell behind in the second half, dropping their third straight game to USF (and second this season) in Tampa, 51 to 65. The 'Cats shot just 32% from the floor and 36.4% from deep without top-scorer Maalik Wayns available. USF eventually heated up enough to connect on 50% of their shots despite going for just 27.3% from the perimeter.

JayVaughn Pinkston scored 8 points for the Wildcats, but was just 1-12 from the floor, with his only field goal coming on a three-pointer early in the game. He couldn't find a solution to the USF front-line, constantly seeing his shots blocked, the ball stripped, or being whistled for a foul when going in to the basket. Pinkston would ultimately foul out of the game.

While he didn't foul out, Mouph Yarou was also in foul trouble for much of the game, finishing with just 4 points and 5 rebounds for the Wildcats.

Maurice Sutton was the Wildcats' leading scorer with 10 points, but had just 3 rebounds. Markus Kennedy was close behind with 9 points, all scored in the last 4 minutes of the game, with a lay-up, a tip-in and a 3-pointer. Kennedy was 4-5 from the field with 2 rebounds and a steal as well.

The team had just 5 assists on 16 made field goals. They lost the rebounding battle 26 to 28, but led the Bulls on the offensive glass, 10 to 6, on a strong second-half effort.

South Florida had four players score in double-digits. Victor Rudd and Hugh Robertson scored 14 points and had 2 rebounds each. Jawanza Poland and Anthony Collins each scored 10 points. Collins also dished out 6 assists for the Bulls in what was an impressive night for the South Florida point guard.

Forward Ron Anderson, Jr. was the only player on either team to record 10 rebounds.

USF now has tied their best effort in Big East play with 9 wins and are likely to beat that mark with 5 regular-season contests left. Villanova's record falls to 11-14 on the season and an unusually-awful 4-9 in the Big East conference on the loss. Their next game will be at-home against 25th-ranked Notre Dame on Saturday night.