Harrison Brothers down to 4

Share All sharing options for: Harrison Brothers down to 4 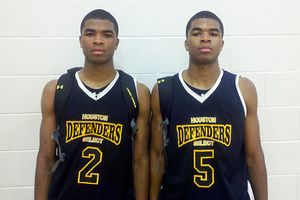 Villanova remains in the picture for Houston-based backcourt duo, Andrew and Aaron Harrison — two of the top guard prospects in the 2013 class. They recently narrowed their list down to four schools that include Maryland, Kentucky and Baylor in addition to Villanova. Maryland's coaches have been pressing them hard on the recruiting trail.

"What I like about Coach Turgeon is, he’s really transparent. He means what he says and he says what he means. So there’s not a lot of fluff. I’m not a big fluff guy."

Despite his relationship with Turgeon, their father said that ultimately the decision of where to attend college will be his son's alone.

There is no timetable for the talented twins to make a decision, but they won't decide until after they've had a chance to visit Villanova. They have visited the other three schools on their list, but haven't yet made a trip to the Main Line.

They may well become Wildcats sooner rather than later, however — their father admitted that they are high on Kentucky. They aren't a lock to attend UK or any other school, though. They are reportedly looking to find a school among their final four where they will be "comfortable." They want to be part of a "family" environment.

Jay Wright was in the house to see Josh Hart's Sidwell Friends team play last Friday, February 10. Assistant coach Billy Lange accompanied him there, but wasn't expecting to be doing much more than evaluating the talent. Wright saw enough from the 6-4 junior shooting guard to issue him an offer on the spot, however.

Hart made a game-tying, 3-point, buzzer beater at the end of regulation to help the Quakers beat Flint Hill, 74-69. That was his only triple of the night, but he accumulated 16 points in the contest.

Hart had transferred to Sidwell this year from a public school, and has improved his academics.

According to The Recruit Scoop, he will visit Villanova this weekend, and will make a college decision this fall. He is also on the radar at a laundry-list of schools, from high majors like Georgetown and NC State to Ivy League schools like Penn. Lately, Penn State, Georgetown and N.C. State have been recruiting him the hardest and he has visited each of the latter two twice.

On his game, The Recruit Scoop writes:

A hard worker on and off the court, Hart is a college coach’s dream. With good size, he gets his teammates involved by passing the ball, but can also score by shooting the rock and slashing to the basket. Hart rebounds and uses his body to box out. His shot is accurate, but he needs to improve upon his mid-range game. If the junior guard can work on his ball handle, his upside is through the roof as he has the potential to be a very good combo guard at the next level.