Share All sharing options for: Not[re] just another game 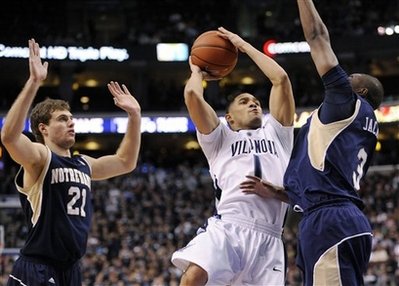 Villanova has stumbled and bumbled through the 2011-12 season so far, but their next opponent, will be coming to Philadelphia on a seven-game winning streak. Notre Dame won their tenth league game on Wednesday night against Rutgers. Their streak started with a 67-58 upset of Syracuse, the Orange's only loss, on January 21. During their streak, the Irish have allowed opponents to score only 55.3 points per game.

Notre Dame started the season slower, losing to Georgia, Gonzaga, Maryland, Indiana and Missouri in non-conference play. Their three conference losses were against UConn, at Rutgers and at Cincinnati, the last coming on January 16 at the RAC in Piscataway, New Jersey.

Forward Jack Cooley recorded a double-double in each of the last three contests. Cooley has taken well to his role on the Irish team, averaging 11.9 points and vacuuming up 9.2 rebounds per game. He connects on over 61% of his shots.

Everyone on the Notre Dame team has had to step-up after Tim Abromaitis went down with an injury. Two sophomore guards shoulder most of the scoring load, with Eric Atkins averaging 12.8 points and 3.8 assists and Jerian Grant scoring 13 points and dishing out 4.8 assists per game. Atkins has also been one of Notre Dame's best shooters, connecting on 39.8% from outside.

Defensively, the Irish rate about the same as South Florida, but offensively, they are significantly better, ranking 44th in offensive efficiency. Villanova will have to be far more effective on the offensive end than they were in Tampa on Wednesday night if they will have a chance to stay in the game against a Notre Dame team that has been playing its best basketball since January — and even better in February.

To that end, getting Maalik Wayns, the team's leading scorer, back from a left knee injury would be helpful, but he is still listed as "day-to-day." Wayns is healing, however, but his availability on Saturday night is unlikely to be determined until shortly before tip-off. Without Wayns on the court, opponents become more and more likely to double-up on JayVaughn Pinkston, who had been on a tear in Big East play, daring anyone else to step up and score.

Dominic Cheek remains the team's second-best scorer with 12.4 points per game, but he has been inconsistent and is often content to hang out on the perimeter taking long jump shots. Yarou has averaged 11.1 points, but has also seemingly fallen off in league play.

James Bell on the other hand had come on strong in the last few games prior to South Florida and is the team's best outside shooter (other than Markus Kennedy, whose 1-1 performance this week put his season 3-point percentage at .500). If Bell can be coaxed into an offensive outburst, defenders will have to pay more attention to him, and will ease up on Pinkston inside.

That coaxing may have to come from an energetic fan-base, which may be too much to ask for at the Wells Fargo Center in the middle of this very disappointing season. The boisterous-though-sparse student section at the tiny Pavilion seemed to power the Wildcats in their last home game — a 19-point comeback victory over Providence.

Villanova has no pretentious of making it to the NCAA tournament as an at-large selection this season. What the 'Cats can hope for, however, is improvement and some degree of hope going forward. Pinkston and redshirt-junior Maurice Sutton have both brought a level of energy and drive to the team lately that has offered a glimpse of hope down the stretch. Now it is time for the rest of the Wildcats to leave it all on the court.

The game will tip off from the Wells Fargo Center in Philadelphia on Saturday at 9 p.m. ET and will be broadcast nationally on ESPNU.