Party To Save Lives

Share All sharing options for: Party To Save Lives

Matt Szczur didn't need to know who the little girl was when he saved her life, he just knew that donating his bone marrow was the right thing to do. He may never have been in that position in the Winter of 2009-10 had he not taken part in Andy Talley's "Get in the Game, Save a Life" program at Villanova. That program has now spread well beyond the Villanova campus, with athletes and private individuals all over registering to become marrow donors.

In order to fund the testing and registration program — each test costs $100 — Talley has begun raising funds through his foundation. The key event of the fundraising season is approaching on March 3rd, the Bone Marrow Bash, which will be held on campus at the Connolly Center and attended by some Villanova luminaries like Brian Westbrook and Kevin Reilly (a former Philadelphia Eagle and current Xerox executive). 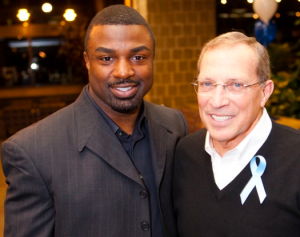 "Be the Match, they fund me to the tune of about half-a-million per year," Talley noted. "My 32 teams, if you multiply 8,500 people by $100 [the cost of each test], that’s over half a million dollars." Be The Match funded all that.

"I’m their biggest guy in terms of getting bone marrow testing done. Nobody does more than me and that’s how I want it. I could take it across the country, but the problem is that they don’t have the money to support me. They held me at 32 teams."

"They can pull out anytime and say, ‘funding has dried up we can’t do it anymore,’ so I want to make sure that it’s always being done at Villanova every year," the coach said.

If Be The Match ever was forced to pull out of the program, it would reduce the donor rolls by thousands. That means no more stories like Matt Szczur or UMass' Ryan Carter, who selflessly donate marrow after being tested as part of Talley's program. Each donor registered in their 20s can stay on the registry for 40 years.

You can help Talley's foundation save lives, meet Brian Westbrook, and have a good time by attending the 2nd Annual Bone Marrow Bash. Space is still available.

To register for the Andy Talley Bone Marrow Foundation Bash, go to TalleyBoneMarrow.org or call 610-401-7665 for more information. Tickets cost $75 per person for the event that goes from 7pm until midnight and includes dinner, entertainment and an open bar (beer/wine).