Luck of the Irish: Nova loses in overtime

Share All sharing options for: Luck of the Irish: Nova loses in overtime 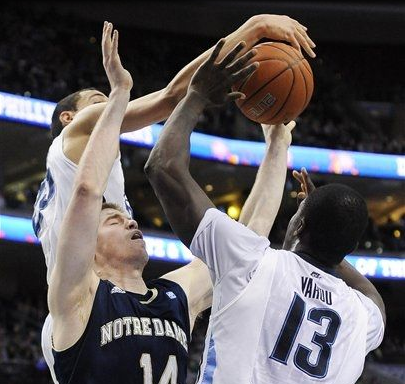 Villanova lead by as much as 20 in the first half, but couldn't hold on as Notrre Dame's shooters heated up before the intermission and carried the momentum through to the second half. The 'Cats were able to claw back far enough to take the game to overtime on a Maurice Sutton buzzer-beating layup, but the 'Cats couldn't stick their shots in the extra period and Notre Dame pulled away for a 74-70 win.

"It shouldn’t even have been overtime," Villanova head coach Jay Wright lamented. "We had the shots to win a close game.

"If you’re a real good team, you win that game by 16-, 18-, if you’re a struggling team that can make plays at the end you win it close at the end, but we just couldn’t make the shots. We had the shots and couldn’t make them — and they did. You have to give them credit. They executed better than us down the stretch; 20 assists, that’s pretty impressive."

Villlanova started the game a little slow, staying even with Notre Dame and ultimately falling behind by 5 points after the first four minutes had passed. That would be Notre Dame's biggest lead in regulation, however, as the Wildcats came storming back, going on a 23-2 run to extend their lead to 13 points in the next 7 minutes, reaching as high as 20 points on a Markus Kennedy dunk with just under 2 minutes before the intermission.

Notre Dame heated up and chipped the Villanova lead back down to 16 points before the break, foreshadowing things to come in the second half.

At halftime the Wildcats were clobbering the Irish, 39 to 23 on the scoreboard and 24 to 10 on the boards including 9 to 7 on the offensive glass. Villanova looked like a team poised to win big in a big game at home. The Irish shot just 25% from the arc and 35.7% from the floor, while Villanova made 50% of their shots from deep, including a 2-for-2 showing from Dominic Cheek. Playing on the perimeter because of James Bell's injury, JayVaughn Pinkston went 2-for-4 from outside in the first half.

Notre Dame wasted no time when the second half started. Pat Connaughton, who connected on just 2 of 5 attempts from deep in the first half, got into a groove as his teammates began to look for the extra-pass to get him the ball. He would connect on 5 triples in the second half to bring his tally to 7 for the game — accounting for all 21 of his points.

"We struggled a lot in the second half," Jay Wright noted. "They did a good job pressuring Ty Johnson and I think that got the game close."

Jack Cooley also stepped up and battled inside. He picked up his third foul with 11:32 to go in the game and his fourth with 6:39 on the clock, but barely touched the bench during the game, playing 42 of 45 possible minutes. He scored 18 points in the game and grabbed 10 rebounds in the second half to bring his total to 13 for the game.

In addition to tremendous shooting, Notre Dame rebounded much better after the break as well. They finished the game out-rebounding Villanova 27 to 23 in the second half and overtime, and 10 to 7 on the offensive glass, which granted the Irish extra chances to correct for their occasional misses in the half.

In addition to Connaughton and Cooley, guards Eric Atkins and Jerian Grant both scored in double digits, putting up 17 and 10 respectively. Grant also recorded 9 assists in the game, while Atkins had 5.

Villanova recorded just 13 assists as a team, with 7 of them belonging to Ty Johnson, who scored just one point. Johnson didn't record a turnover in the first half, but coughed up the ball twice in the second. Nova turned the ball over 12 times in the game, with Pinkston, Sutton and Mouph Yarou combining for 7 of them, often on inlet passes that were fumbled away.

"We were trying to get the ball in to Mouph and that hurt us. We turned it over a couple times, a number of times. One was a bad pass, a couple were bad catches, it hurt us."

Pinkston led the way for all scorers with 24 points, going 4-for-8 from beyond the arc and 6-of-8 from the charity stripe. Dominic Cheek was second for Villanova with 19 points, adding 3 assists and 6 rebounds while connecting on 60% of his attempts from deep (just one made in the second half).

Maurice Sutton perhaps had the best game of the group, however, putting up his second consecutive double-double at the Wells Fargo Center in his first start of the season. Sutton played 40 minutes, scoring 12 points and grabbing 10 rebounds — he had 10 points and 8 rebounds in regulation. He also contributed 4 blocked shots, 1 steal and an assist.

"He’s stepping up," Wright said about the 4th-year junior. "I always talk to Mo about, you know, everyone has a different journey, you know. Someone could write a book on Mo’s journey, it’s unbelievable, but where he’s getting to now, he understands what we’re doing, he’s been in a lot of big games, he’s been here a long time and he’s starting to get it. You see it, he made huge plays."

One of those huge plays was a layup after rebounding Ty Johnson's miss with 0.09 seconds left in regulation that sent the Wildcats to overtime.

"You always hoped it would happen earlier, but I think it’s starting to happen for him now."

Villanova went big and managed to lead the game in points in the paint, 28-to-22 and second-chance points, 10-to-7. The loss was in a large part due to continuing struggles covering the Irish shooters, an issue that Jay Wright thought might be explained by the positions his players have been asked to guard.

"The shooting 2-guard, if you look at our 3-point field goal percentage defense, is something we’ve struggled with all year," Wright stated. "And I think part of it is because we’ve got to kind of play Cheek out of position at the 2, and he’s really a 3, but our young guys really haven’t been ready right there. I think, Its something we struggled with all year, even though Grant’s the 2, but we put JayVaughn on him, JayVaughn is used to guarding bigs, JayVaughns chasing him around. Its just little things like that.

Both teams made just three field goals in the 5 minute overtime, but all three of Notre Dame's were 3-pointers. As the time ticked down, Villanova missed 7 shots from the floor, including an off-balance triple attempt by Pinkston from the top of the key that would have tied it at 68 each.

Pinkston was in that position because the 'Cats were trying to alter their attack with Ty Johnson struggling through a cramp.

"We were really trying to let Ty [Johnson] run the offense, but at the end he was cramping, so we just, we really didn’t have anything left to do," Wright said. "We tried to keep JayVaughn at the top because we thought he would draw two, and then we could kick it to the wings and we could make plays.

"It wasn’t something we’ve ever practiced, but it was just something we tried to do in the huddle because Ty was cramping and he was struggling as it was, so we were desperate there."

Notre Dame made most of their free-throws in overtime and benefitted from 60% shooting from the floor to hold on in overtime for the narrow win.

"Obviously a tough loss and a game you wish you never had the experience, but we’ve had a couple of those this year and we’re just paying our dues," Wright explained. "Notre Dame made every big shot down the stretch. We, down the stretch, missed every big shot. We got good shots, we just missed them.

"I’m proud of the effort, I think we’re getting better defensively, but — I don’t want to be negative, I’m optimistic about this team, I’m optimistic about the future of the program — but I’ve got to be honest. Mike [Brey]’s got a freshman guard out there, he’s a redshirt freshman, and a sophomore guard and those guys really controlled the game. We had a freshman guard out there, but you gotta give Mike credit, that’s one thing I wish we could be doing a better job of."