No time to dwell, it's almost game-time again

Share All sharing options for: No time to dwell, it's almost game-time again 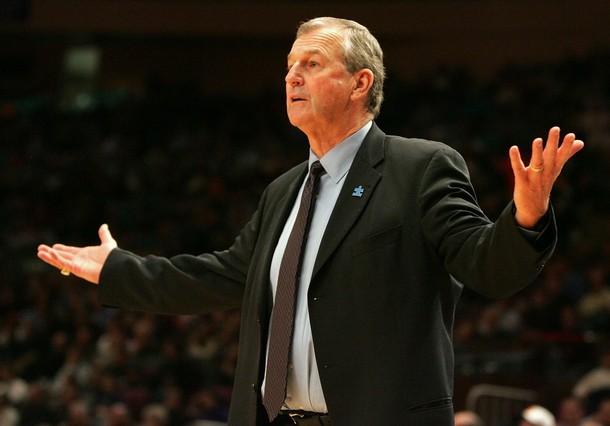 UConn's most important basketball star won't be available on Monday when the Huskies travel to Philadelphia on Monday. Jim Calhoun went on an indefinite leave from the program until he is able to resolve a lower-back pain issue. They have lost 7 of their last nine games with wins over just Seton Hall and DePaul in that stretch, and 3-of-5 games without Calhoun on the sideline.

Instead, assistant coach George Blaney has taken the reigns of the UConn program in the interim.

After the coach, UConn's other star is Jeremy Lamb, who has scored 17.2 points per game and grabbed an average of 4.6 rebounds. The sophomore swingman has also been the Huskies' best free-throw shooter at 83.5% and connects on a little over a third of his attempts from deep.

The Huskies share the ball well among their key players on offense, with all five starters using a roughly-equal percentage of offensive possessions while on the court.

Point guard Shabazz Napier is the second-leading scorer, accounting for 13 points and 5.8 assists per game. He also grabs an average of 4 rebounds per game and connects on 34.1% of his attempts from beyond the arc. Ryan Boatright, a freshman guard, is the Huskies' best shooter, however, with a 41.7% 3-point percentage, helping him to average 10.4 points per contest.

Andre Drummond is the fourth player scoring in double-digits, and the talented freshman center has scored 10.1 points and averaged 7.6 rebounds per game for Connecticut. Drummond also leads the UConn block party with 2.5 blocks per game.

Both the UConn offense and defense are ranked in the 40s by KenPom.com for efficiency, with their biggest weaknesses being defensive rebounding (they allow opponents to grab a higher-than-average 33.2% of their offensive rebounds) and generating turnovers. As a team, their 3-point percentage is below-average as well.

The Huskies have 16-wins on the season, but have just 6 of those in conference play, where they are below-.500 so far. Napier has publicly called out his teammates, offering the suggestion that maybe their hearts aren't in the game right now.

"I’ve got to question a lot of these guys’ hearts," Napier told the Associated Press after his team lost 79-64 at home to Marquette. "The simple stuff — allowing somebody to get an alley-oop at the end of the game, just quitting with 16 seconds left — it doesn’t look like UConn basketball."

Villanova, meanwhile, has seen its own fortunes in the dumps and players have been inconsistent in keeping up when playing with a deficit. A home crowd may be key to keeping the Wildcats' energy levels high — which has seemed to be the case so far, with only one true away-game victory this season.

Their fortunes may be hampered, however, by the absence of James Bell and likely absence of Maalik Wayns, both of whom will sit out against Notre Dame. Bell has also been officially ruled out for UConn, while Wayns' remains "day-to-day" with his MCL sprain. Without those two players, the 'Cats will need some young players to step up and take pressure off of JayVaughn Pinkston who took was swarmed by the USF front line while forced into a feature role.

The game will tip-off at 7:00 p.m. at the Wells Fargo Center in Philadelphia and will be broadcast nationally on ESPN.