UConn't be serious! Another OT loss in Philly

Share All sharing options for: UConn't be serious! Another OT loss in Philly 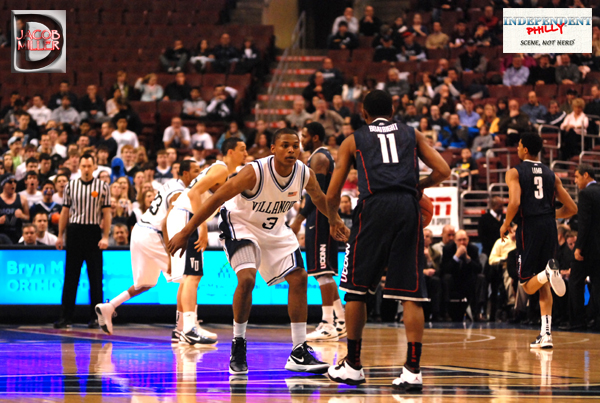 Villanova coughed up another early 18 point lead at the Wells Fargo Center on Monday night. UConn came storming back late in the first half and the score was tied at halftme. Fans were understandably dismayed as they got up at the intermission, but the Wildcats were ready to fight in the second half, keeping the game close. They got back ahead of the Huskies 60-58 with about 30 seconds left when an errant inbound pass was stolen, allowing UConn to tie it up at 60 apiece with just 19.5 seconds remaining.

With the ball, the 'Cats gave the ball to JayVaughn Pinkston, who couldn't get his shot to fall and the game went into overtime of the second straight game. The 'Cats again kept things close in the overtime, but a Shabazz Napier triple, launched from West Chester, with 0.2 seconds left sealed their fate — a 70-73 loss.

"You’ve got a couple ways to look at this, and there’s no choice but for us to say, ‘you know what, we’re going to learn from this and we’re going to get better,’ and there will be a point where this is something we draw upon," Villanova coach Jay Wright said after the loss.

"There’s no question that this is tough on our guys, we’re battling, we’re in games. End of game situations, we’re actually doing some good things. This is twice now in the end of regulation we get a stop and we score a basket. We also make defensive miscues and turnovers too."

A hustle play by Dominic Cheek helped the 'Cats knot the score up at 58 each with just under 3 minutes remaining in the game. Cheek stole the ball near the top of the key and ran the length of the court to score the trying bucket. Yarou was fouled under the basket about a minute later, and nailed both ends of a 1+1 to give the 'Cats a 60-58 advantage.

UConn wasn't done, however, and Roscoe Smith managed to steal the ball away and Alex Oriakhi scored on a second-chancer to tie things up with 20 seconds left. Villanova couldn't respond.

In overtime, the Wildcats struggled getting their shots to fall, but never fell behind by more than 3 points thanks to a couple of opportunities at the charity stripe, where they went 4-for-4. UConn did not fare so well, making just 5-of-8 opportunities at the line, while Villanova fouled them intentionally to stop the clock.

After Ty Johnson sunk a lay-up to tie the game again at 70-points each with 5.9 seconds on the clock, Shabazz Napier nailed a prayer from 29-feet out.

On the ensuing inbound play, with 0.6 seconds left in the game and no margin for error, Ty Johnson heaved the ball out of bounds as Dominic Cheek tried to chase it down.

"As leader of the team, I take responsibility for that loss," Cheek quickly offered when a reporter tried to ask about the in-bound mistake. "I should’ve just called time-out to be honest with you. I just wasn’t thinking at the time."

"We overloaded one side of the floor and were just trying to throw it to the first open man," Wright explained of the play. "We put five guys on one side of the floor, and we had a timeout [left]. That’s just a young player making mistakes. It’s a simple thing, there were a couple guys open and he just made a mistake." 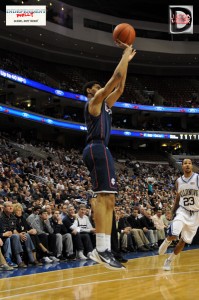 Jeremy Lamb reached a new career high for points in the game with 32 on 11-of-21 shooting (52.4%) and added 5 rebounds and 2 assists. His Lamb's previous career high had been 30 points. Dominic Cheek was responsible for guarding Lamb during the game.

"Jeremy Lamb is a great player, I respect his game, its just something I need to continue to work on," Cheek said. "Just keep working on my defense."

Lamb was only 2-of-9 from deep and the Huskies shot 30.4% from beyond the arc during the game. Star center Andre Drummond, likely the reason that 12 NBA scouts were in the building, was held to just 8 points, though he did grab 11 rebounds (8 in the first half). None of the UConn forwards reached double-digit points.

"Our interior defense has been very good this season."

JayVaughn Pinkston scored 13 points and grabbed 10 rebounds to record another double-double. He was on the court for 42 of the 45 available minutes in the game and has been a key player since Wayns went down with his left MCL injury during the Providence game.

Wright believes that the opportunity to get Pinkston and Johnson over 40 minutes of game time was a positive. They will be more prepared for the go-to roles they will be asked to perform in later.

Johnson scored 14 points for the Wildcats, which was just his first time scoring in double-digits this season. He also grabbed 5 boards and dished out 6 assists, but turned the ball over 4 times.

Johnson was one of three Wildcats who were perfect from the free-throw line making all 6 of his attempts. Yarou made all 5 of his and Cheek sank 3-of-3. Villanova made 89.5% of their free-throws overall and made 100% in both the first half and overtime.

Villanova made just 33.3% of their shots from beyond the arc in the game. They started hot, making 3-of-6 in the first half, but failed to connect on any of their next three more attempts in the second half and overtime. Cheek connected on 40%, on his way to a team-leading 23-points.

Pinkston was the only other player to connect on a 3-pointer as Nova shifted their focus to the paint in the second-half.

Despite roaring back from a 22-to-18 deficit on the boards at halftime to finish the game ahead of Connecticut, 44-to-37, the Wildcats couldn't take advantage of their offensive rebounds. Both teams finished the game with 14 offensive boards, but the Huskies held a 17-to-8 advantage on second-chance points.

Villanova's record falls to 11-16 on the season and 4-11 in the Big East with just three regular-season games to go. The Wildcats have only lost as many conference games once since joining the Big East in 1980 — they lost 15 games in the 1992-93 season.

"You’ve got to go through these situations, you’ve got to take the heat and stay strong through it, and make sure you pull it together," Wright preached.

The Villanova coach also noted that the young Wildcats had no real reference point to draw from. None of his players or staff had ever experienced anything like this before.

"They haven’t been through anything together, nothing, and the last seven years everything’s just been really good here. There’s no one around here that was here the first three or four years — no one.

Wright said he tells his players to look at the positive situations to keep them upbeat about their potential. He recalled showing his team the end-of-game situation from the Notre Dame game, discussing what went right to allow the 'Cats to take that game to overtime.

"Show them that, and it’s the same thing, it’s the same end-of-the-game situation. You just got to do that one or two possessions more, and not look at the results.

"I just think we’re going to learn from this. This is part of the process of an inexperienced team, its obviously painful, but its what sports is all about."