Where is the faith?

Share All sharing options for: Where is the faith? 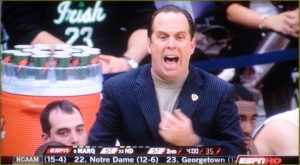 "I know [Mike Brey] really likes this team and he should, I think he's got great leadership and great guard play," Jay Wright said after his team lost to Notre Dame in overtime. "That little difference is making them a great team."

Notre Dame's leadership has allowed their team to overcome the adversity of losing their star player in forward Tim Abromaitis and losing 5 games in non-conference play. Villanova also lost five games in the non-conference portion of their schedule, but didn't have the same rebound in conference play. While the Irish await their seed and region on Selection Sunday, the Wildcats will be finishing their homework for Monday's classes.

The difference between the two schools isn't a matter of experience. The Irish start a freshman and a sophomore at the guard spots and have just one senior on the active roster, Scott Martin. Villanova also plays many freshmen, sophomores and juniors and has one senior (classified as a junior by eligibility), Maurice Sutton, on their roster.

So why did the Irish turn into a Princess while Villanova has turned into a Pumpkin? The answer is faith: Mike Brey's players have bought in, both to their coach's system and his way of thinking. According to Brey:

"We were young and we were so dysfunctional in November and December, to see them make these strides is amazingly gratifying. I tell them all the time, ‘I’m honored to be your coach.’ It’s a fabulous group of students to work with all the time. I haven’t had more fun at Notre Dame."

For the coaching staff, it was time to teach and motivate.

"We have really good kids, they hung in. In November and December, they hung in there when it was bad and didn’t look good, and we just I told my staff, we just have to be really good teachers. Lets just teach."

"I spoke to them about striving to be special, and I told them tonight that I just think we’re special, I really do. Lets remember the recipe and remember we’ve got clear heads and remember how we play together."

Any coach in the same position would tell his players the same things, but Brey's players did something unusual; they believed him. They have played with a certain level of confidence that has allowed them to fight through tough games and pull off comebacks like they did on Saturday night.

According to junior forward Jack Cooley:

Mike Brey credited his ability command the faith of his team to a certain level of longevity and success that he has enjoyed at Notre Dame.

"Luckily, I’ve been at my place for a while and we’ve had success, so I get the benefit of the doubt that they’ll listen," he explained. "Not all coaches have that. We’ve done some pretty good things with our groups previously."

Brey has made it to the NCAA tournament 7 times since taking over the Irish program in 2000-01, with his deepest run taking him to the Sweet Sixteen in 2003. His success on the court has largely been exceeded in that time by Villanova coach, Jay Wright, who has also made 7 tournament appearances, including a Final Four and has only failed to reach the second weekend three times.

What Brey has that Wright doesn't, however, is a history of overcoming potentially season-killing tragedy. In 2010, his star forward Luke Harangody suffered a knee injury that kept him off the court, but the Irish powered ahead to a 23-win season and made a run to the Big East Tournament semifinal.

"When Timmy [Abromaitis] went down, I told the team that this is no different than when we lost Harangody, we’re supposed to be dead, we’re off the map, we’ve done this before," Brey recalled. "So we had a reference point. It helped me more than it helped the team, to keep my sanity through it."

For Villanova, the only reference points that the young Wildcats have to refer to are the struggles of the past two seasons, where late stumbling lead to full-on collapse down the stretch and into the NCAA Tournament. Only Mo Sutton can recall the successes of Jay Wright's past first-hand, but he did so cheering from the bench as the Wildcats battled their way to the 2009 Final Four.

Notre Dame isn't out-talenting anybody, they're outplaying them, because they believe that it is possible for them to do so.

Villanova hasn't executed and often struggles with roles. More importantly, they lack the confidence, or "attitude" that was instilled in prior years. Wright can't command these players to believe like Brey does because they have never known the feeling of rising from the flames like Notre Dame has — they don't have a reference point.