Lowry starring at the break

Share All sharing options for: Lowry starring at the break 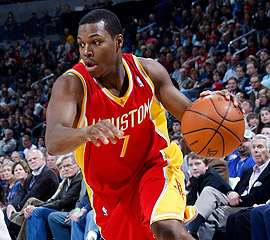 Former Villanova point guard Kyle Lowry has emerged from a slow start to his NBA career to take Houston by storm. Working his way into the starter's job by the end of last season, Lowry has become a vital part of the Rockets' 20-14 start to the season.

Lowry has averaged 15.6 points per game this season along with 7.6 assists and 5.3 rebounds. Perhaps more impressive to those who watched him play at Villanova, however, is his 37.5% shooting from beyond the arc. Prior to 2010-11, Lowry had never shot above 27.6% from deep (not counting an injury-shortened 10-game rookie campaign). Lowry's 7.6 assists per game is also a big improvement over his career average of 4.8.

Lowry didn't make the All-Star cut in the western conference, which has a loaded backcourt with Kobe Bryant and Chris Paul starting and Steve Nash, Russell Westbrook and Tony Parker on the bench. Lowry finished 6th in the voting.

The lack of recognition hasn't seemed to foil Lowry. On Wednesday night he scored 13 points in the last two minutes of a game against the Philadelphia 76ers to beat the visiting team 93-87 and carry Houston to a three-game winning streak. He played much of that game with a sprained ankle. 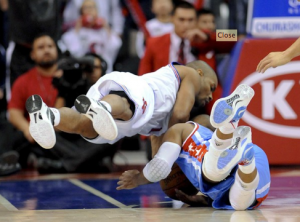 Foye moved to the Clippers as a free agent signing in 2010-11 and became a contributor by the end of the season. This summer, however, when the team acquired Chauncey Billups and Chris Paul, Foye got pushed back into a back-up role. As has been the usual storyline, however, an injury has forced him back into the starting line-up and Foye has responded well to that role.

Foye has averaged 8.4 points and 2.4 assists this season, but has scored in double-digits in all-but two games since becoming a starter. He has averaged 10.9 points and about 2.9 assists and 2.7 rebounds in about 31 minutes in those games

Foye was asked to step in when Billups suffered a torn left achilles tendon and will be out for the rest of the season.

"We got to play a lot better, and Randy’s going to be a big part of that," coach Vinny Del Negro said. "His role is going to expand because of our injury situation, and we have confidence in Randy. It’s not just Randy. It’s everyone."

"Randy’s been a starter in the league," Del Negro said. "He did a nice job for us last year when Eric [Gordon] was out last year. We won some games. I expect a lot from Randy."