What rocks at the Verizon Center?

Share All sharing options for: What rocks at the Verizon Center? 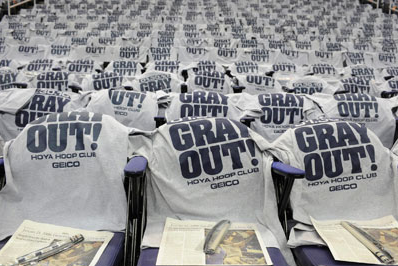 It will be awfully gray in the Verizon Center on Saturday if things go according to plan for the Hoyas, who are asking fans to wear the color gray for a "gray-out." At 20-6 overall and 10-5 in the Big East, Georgetown is tournament-bound and ranked, but will need a win this weekend to secure a double-bye for themselves in the Big East tournament. Add the rivalry-factor to that, and you can expect that Saturday's game will be played like a must-win.

Both teams lost earlier in the week, with the Wildcats dropping one in overtime on Monday to the UConn Huskies and Georgetown becoming a signature win for the Seton Hall Pirates. The 18-point loss in Newark, New Jersey stunned the number-8 ranked Hoyas.

"I think the Seton Hall game may be our worst performance of the year at both ends of the court," Georgetown head coach John Thompson III said. "[Jordan] Theodore was terrific and he totally dominated the game from their perspective, he made big shots. Early in the second half we though we would get to chip away at it, but he controlled the game, thats what seniors do.

Villanova, meanwhile is lacking the senior firepower that Seton Hall has in Theodore and Herb Pope, who have been among the leagues' best at their respective positions this season. What Villanova does have, is some talented youth that has been trying to get comfortable with their roles.

"I think they both [Pinkston and Johnson] are playing really well, they're both really confident young men, you know, and Pinkston has been called on to make big plays and Ty has had the ball in his hands," Thompson said. "Speaking of Tyrone in particular, I think he's very very poised and does a good job of distributing the ball to his teammates as well as knowing when its time for him to take them."

Even though the Wildcats have struggled with opposing guards this season, Villanova's backcourt-play is something that concerns the Hoyas' coach.

"I think that we do match up with them but the flip side is that they match up with us," he noted. "They always have done a very good job with their guard play at both ends of the court. They always have the sort of players, they switch everything, jump everything and they keep you off-kilter, which I don't think will be any different."

Jay Wright hopes to have star junior Maalik Wayns back on board for Saturday's game to bolster that backcourt. The junior point guard has been sidelined since the second half of the Wildcats' home game against Providence with a sprained MCL in his left knee. James Bell is

"I would say right now — because Maalik Wayns tried to go a little bit this morning in practice — as of right now I'd say Maalik is 'hopeful' for Saturday and James Bell is 'doubtful,'" Wright told reporters.

Wayns is the team's leading scorer and one of the Big East's best in that department with 17.8 points per game. Dominic Cheek has helped to pick up some of that burden in his absence, averaging 16.3 points per game in his last three outings and 15.6 in his last six. That number was boosted by a 23-point outburst against Connecticut this week.

With Bell sidelined with a left ankle injury, Maurice Sutton has stepped into a bigger role, starting in the last two games and averaging 8.5 points, 8.5 rebounds and 3 blocked shots in those contests, including a double-double against Notre Dame.

The Hoyas are lead by senior guard Jason Clark with 14.5 points per game and junior forward Hollis Thompson with 13.2 ppg. Senior center Henry Sims has also played a major role in Georgetown's version of the Princeton offense, scoring 11.3 points per game, grabbing 5.5 rebounds and leading the team with 3.5 assists per game.

Georgetown's offense makes use of its center to help run the offense by making passes out of the high-post. That makes the Hoyas very effective against the 2-3 zone defense.

The Hoyas can also shoot the ball, with three players connecting on more than 1/3 of their 3-point attempts. Thompson leads the way, connecting on a deadly 47.7%, while Markel Starks has hit on 37.9% and Clark makes 34.2% as well. As a team, they connect on 35.7% overall.

"Tough team and its hard to call Georgetown underrated, but I still think they are," Wright said of the weekend's opponent.

In practices this season, Wright claims that, "the attitude has stayed pretty good," and that his players remain confident. Young players or longtime reserves like Maurice Sutton, he said, are happy about the opportunity to play more minutes.

"We've played tough, you know we're playing without Wayns and Bell and we're getting valuable minutes for our freshmen, Ty Johnson and also JayVaughn Pinkston is really coming on for us. It has just been a tough year but these guys have stuck together and playing hard and we feel confident going into Georgetown."

Villanova will need more than confidence to steal a victory in the Verizon Center and send the Hoyas to a second consecutive loss.

The game will tip off from the Verizon Center inWashington, D.C. at 2:00 pm on Saturday and will be broadcast nationally on your local CBS affiliate.