No bars at Verizon Center

Share All sharing options for: No bars at Verizon Center 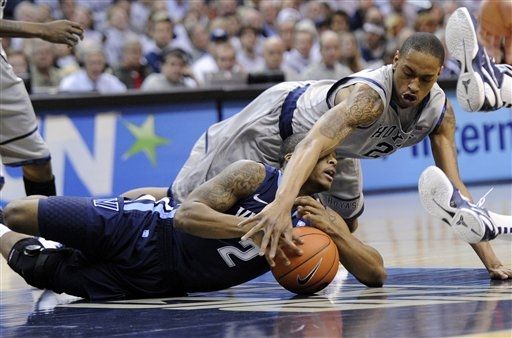 Before the game started, there was good news and bad, as a still-hobbled Maalik Wayns was slated to start, but JayVaughn Pinkston was unable to join him in the line-up, having rolled his ankle in pre-game warm-ups. Later, in the second half, Maurice Sutton was also spotted limping to the bench — he returned to the game. Despite a strong finish to the first half to finish down just 7 points, Villanova could not keep up with the Hoyas after the break, losing 67-46 in Washington, D.C.

Dominic Cheek led the Cats with 19 points and was the only Wildcat to score in double-digits. He also added 4 steals, 1 block and 3 rebounds to help the 'Cats, but fouled out of the game late. Maalik Wayns had just 3 points in his return and contributed 4 of the team's 5 assists and 1 steal. Ty Johnson started the game for the 'Cats and handled much of the point guard duties, but had little statistical impact.

Maurice Sutton had 8 points, a team-high 6 rebounds, and 2 blocks while Mouph Yarou was third on the team in scoring with 7 points. Yarou also had 2 steals and an assist.

JayVaughn Pinkston was able to play in the contest, recording 1 steal, but no points or rebounds in just 2 minutes.

Four Hoyas scored in double-digits, however, led by Jason Clark and Otto Porter who each had 15. Clark was also one of three Georgetown players to reach 6 rebounds along with Greg Whittington and Henry Sims, who was third on the team in scoring with 12 points. Hollis Thompson was the other major scoring threat, recording 10 points and a team-high 4 assists.

Villanova crumbled in the second half, allowing the Hoyas to build their lead back from 7 points into a blow-out. After scoring the first basket of the half to get within 5 points and keeping it within single-digits for the first six minutes, the Georgetown offense picked up just as the Wildcats wore down.

Georgetown has dominated the series recently after Villanova took advantage of weaker Georgetown teams in the early 2000's.