Share All sharing options for: Becoming a Lacrosse School 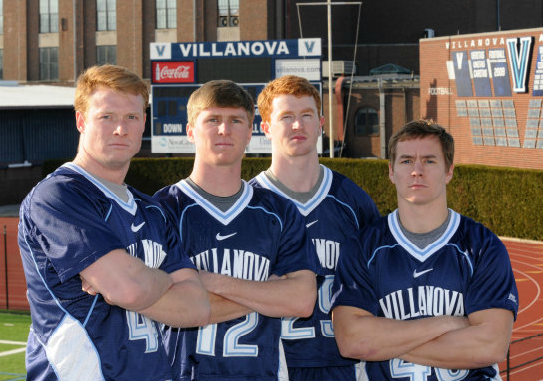 Villanova has been known as a basketball school for most of the last 30-to-40 years. Before that, it was a football school and before that it was a baseball school. This Spring, as the Men's basketball season winds down, seemingly-earlier than usual, the Main Line university may well become a Lacrosse school.

The Wildcats earned an at-large bid to the 16-team NCAA Lacrosse tournament last season, just the program's second postseason appearance. The 'Cats travelled to Denver, Colorado for that game, to play in front of a sold-out crowd. The result was a Villanova loss, but the program moved int0 2012 as strong as ever.

Villanova was named to the preseason top-10 at the start of the year. Since then, the season has started and the Wildcats have won their first two, including a 17-7 victory at Lehigh and a 13-12 overtime win against Bucknell.

On the strength of those victories, the 'Cats have jumped up to 8th in the USILA Poll and 9th place in the Nike Poll. The Wildcats are 2-0 on the season and will host 18th-ranked Drexel next on the 28th.

The LaxPower.com computer ratings put Villanova at 3rd in the nation in their "power rating."

After disappointing football and basketball campaigns, Lacrosse is the biggest sport left on the Main Line that has expectations of success for this season. Starting the season ranked in the top-10, Lacrosse has started the season strong with 2 straight wins and have an opportunity to make a statement this week against a ranked Drexel team.

The Big East needs Villanova, Notre Dame and the other lacrosse schools to step-up this season and next to continue to build the fledgling lacrosse league into a power-player in the fast-growing sport.

This season, Villanova needs the step-up as well.

Without major national success in any other sports that are played with a ball, Villanova fans are hungry for a winning team in 2011-12, and the Lax Cats are in the best position to be that team.

It could be baseball, but the northeast is hardly a heartland for the college game in that sport, as evidenced by the 0-3 beatdown that the Villanova baseball program suffered on opening weekend at nationally-ranked Arkansas a week ago. They bounced back and evened their record at 3-3 after sweeping a series at Norfolk State — a team that the 'Cats also won an early-season series against last year before going on to a 7-20 conference record.

Lacrosse has a history of recent successes, however, and despite a tough schedule, they are expected to perform well this year.

Will Wildcat fans get behind the Lacrosse push this season? We will soon find out.