Share All sharing options for: Villanova to face Rutgers in New York

VILLANOVA, Pa. – Villanova (12-18 overall, 5-13 BIG EAST) will face Rutgers (14-17 overall, 6-12 BIG EAST) for the second time in six days when the two teams square off in the opening round of the 2012 BIG EAST Tournament presented by American Eagle Outfitters on Tuesday night at New York’s Madison Square Garden. The Wildcats are the No. 14 seed in the event while the Scarlet Knights hold the No. 11 seed.

The 2012 Big East Championship will mark the 30th anniversary of the event at Madison Square Garden, marking the longest-running conference tournament at one venue in the country.

Villanova will depart for New York City on Sunday evening at around 6:30 p.m.

The game will be the second half of Tuesday’s night session and is expected to tip at approximately 9:30 p.m. The game will be telecast by ESPNU and can be heard locally on the radio on ESPN950.

Tuesday night’s winner advances to a battle with No. 6 seed, the University of South Florida, the following night. No. 3 seed Notre Dame awaits the winner of that game in Thursday’s quarterfinal. Syracuse is the tournament’s top seed.

Villanova defeated Rutgers 77-71 at the RAC on Thursday night. Junior Maalik Wayns and freshman JayVaughn Pinkston scored 18 points each for the ‘Cats, who built a 48-32 halftime advantage and then held off the Scarlet Knights in the final 20 minutes to post the triumph.

Georgetown and Connecticut have won a conference-record seven BIG EAST Championships. The Huskies made history last season by winning five games in five days to take the conference crown on their way to an NCAA Championship.

The Wildcats were eliminated by USF 70-69 from the 2011 BIG EAST Tournament in the opening round.

The 2012 BIG EAST Championship will be contested next Saturday night. The winner earns the conference’s automatic bid to the 2012 NCAA Tournament. 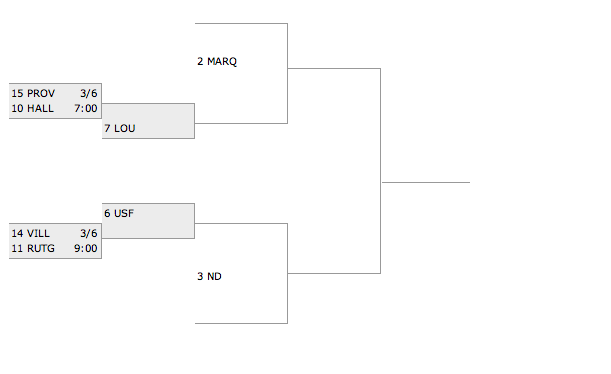 When the Big East released their list of conference honors on Sunday morning, just one Villanovan appeared on the five lists, Maalik Wayns. The scoring point guard for the Wildcats made it to the second-team roster, but a slow start to the season in non-conference play apparently eliminated the burgeoning star of JayVaughn Pinkston from the running among rookies.

The players are voted on by the conference's coaches at the end of the season. The Big East Player of the Year and Rookie of the Year will be announced on Tuesday from the group of players who were named to the First Team and All-Rookie Team respectively.

^Due to a tie in the voting, an additional position was named.