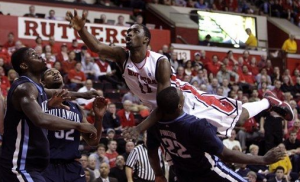 Villanova is in the unenviable position of potentially needing to win a game or two in the Big East tournament in order to sure up their resume for a bid to the lower-class CBI Tournament. The Wildcats are already mathematically eliminated from an NIT bid, which would require at least a .500 record, a mark that cannot be achieved without winning the Big East Tournament.

So the Wildcats are left with three post-season options: (1) Win the Big East tournament and get an NCAA auto-bid, (2) improve their record this week and get a bid to the CBI, or (3) no postseason at all.

The CBI tournament accepts major conference programs sporting losing records, which is why Villanova would have a chance. They do look for some end-of-season momentum, however. A school like Villanova might be looked at by some as being above the CBI, but this years youth and struggles have made them a good candidate for an extended season. Every scholarship player is eligible to return for the Wildcats next season, which means that more games and more experience — it can't hurt.

"Interested, definitely interested, but at 12-18 you're not a prime candidate so we just have to see how things play out," coach Jay Wright told CBSSports.com of the CBI.

Neither JayVaughn Pinkston, nor James Bell, will be 100% healthy on Tuesday night after suffering left ankle injuries.

"James is trying to play, but he probably shouldn't be playing," Wright said to the Philadelphia Inquirer. "JayVaughn is hurting. I know we're not good enough to lose those guys and be really good."

Maalik Wayns is freshly recovered from an injury of his own — a left MCL sprain — and was named to the All-Big East Second Team on Sunday morning. The Wildcat guard has been the focal point of the Villanova attack this season, usually getting some scoring help from some combination of his teammates — most often Pinkston or Dominic Cheek.

His high-scoring ways saw him fly past former Wildcat-greats, Malik Allen and Jim Washington during the regular-season finale on the school's all-time scoring list. If he sinks a layup on Tuesday, he will move into 46th place, passing Harold Jensen as well.

According to Wright, what his team needs is to get into a "rhythm."

They'll start to get that rhythm against Rutgers in a game that KenPom.com gives them a 54% chance of winning on a neutral court. The Wildcats already have a win over the Scarlet Knights, but had to hold on as the Knights surged and came back. Rutgers finished their season ahead of the Wildcats in the Big East standings, but only by a hair.

Still-hobbled Pinkston and Wayns each contributed 18 points in the Wildcats' victory at the RAC. Wayns was limited in the second half by foul trouble — his fourth personal foul coming on a questionable offensive foul call.

Villanova will need to play tougher defense this time around, and do so throughout the game, instead of allowing their opponent to come back like they have so many times this year. They also need to control their turnovers, which have been an issue at many times as well — they turned it over 20 times in the Rutgers game.

Villanova's strength this season has been on the boards and that should continue to carry on at Madison Square Garden this week. Oft-criticized Mouph Yarou is averaging 8.2 rebounds per game and the team averages 39.5 per game, good for 13th in the nation. They have averaged a solid 13.9 offensive rebounds per game as well.

If they can earn the win tomorrow night, the Wildcats would play South Florida again on Wednesday night, a team they lost to twice this season, 74-57 and 65-51. That game will be an even bigger challenge for the Wildcats; the Bulls would be easy favorites to win a third time on a neutral floor.

It would be a cinderella story for Villanova to make its way to Thursday night or beyond, and maybe that is the kind of shot-in-the-arm that fans will need to enter next season with a modicum of confidence.

Villanova expects to tip-off around 9:30 p.m. and the game will be covered by ESPNU and ESPN 3D.

Last-place DePaul had a good start to the season before conference play, but their promising results couldn't be carried through to the conference play. The Blue Demons did end the season with a blow-out of Seton Hall, giving them some momentum coming into a game against a slumping UConn team. Connecticut also ended the season with a win, however, and will be expected to advance after blowing DePaul away on February 15th.

After graduating most of their team last year, the Red Storm weren't expected to do much in the Big East this season. They managed 6 league wins and are the higher seed in their first-round game against a disappointing Pittsburgh team. Despite being the worst Pitt team of Jamie Dixon's tenure, the Panthers should win their first round game with the Johnnies, a team they beat by 20 points less than a week ago.

Providence has the wherewithal to surprise some better teams. Louisville learned that lesson earlier this season, but Seton Hall won't be caught off-guard by the Friars tomorrow. The Pirates need to bounce back from losses to Rutgers and DePaul and win a few games this week to save their NCAA tournament hopes, and that motivation should drive them to a victory.

Rutgers won two of their last three games, including a Saturday-night game against St. John's to lock themselves in as the 11-seed in the Big East, but their one loss came on their home floor against Villanova. The Wildcats haven't been able to beat the top of the Big East conference this season, but they were 4-1 against teams that finished 11th or worse. Expect another close game that the 'Cats can win if they protect the ball and make some big shots late.