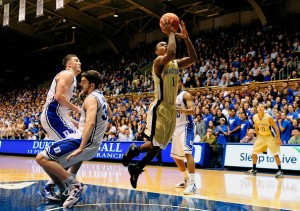 According to Wake Forest, their starting point guard Tony Chennault will leave the program at the end of the spring semester and transfer. The Neumann-Goretti product hopes to move to a program closer to his family in Philadelphia, and some recruiting pundits have already pegged Villanova as a possibility. He would have two years of eligibility remaining, but would likely have to sit out next season unless he can make a case for an NCAA hardship waiver.

"This was a tough decision to leave my teammates at this point in my career, but at the end of the day I have to do what’s best for me and my family," Chennault said in a statement. "This was a personal choice that has nothing to do with basketball."

Chennault is a sophomore who started all 31 games this season for the Demon Deacons, averaging 9 points and 2.8 assists for the sub-.500 squad. In high school, he was the Gatorade Player of the Year for Pennsylvania in 2010 and was the 25th-rated point guard in his class. He was rated 3-stars by ESPN.

He was slowed by a foot injury as a college freshman, which limited him to 15 games off the bench. As a sophomore, he took on a larger role as a starter, averaging 30.2 minutes per game. he connected on 25% of his shots from deep, but makes 40.1% of shots overall. While his offensive stats overall do not rise to the level of the Wildcat's last three point guards, he has the ability to be a serviceable player at that position.

KenPom.com's Offensive Rating for Chennault is a 90, while Ty Johnson produced just a 77.5 in limited action this season. Chennault produced a comparable assist rate to Johnson (20.9 and 21.7 respectively) but produced a much lower turnover rate (20.1 to Johnson's 35.8). He gets to the free-throw line at a notably higher rate than Johnson as well, but makes just 64.8% of those attempts.

It isn't yet known which schools will take an interest in Chennault as a transfer player. Villanova was in the picture for him in his initial recruitment, with a scholarship offer being reported by both Scout and Rivals, so there may be some interest this time around, even if only as a hedge against the future development of Ty Johnson and Ryan Arcidiacono. In any event, the playing time available to him at Nova after next season would be highly dependent on the development of those two guards.

Unless Chennault can receive a waiver to play next season, however, Maalik Wayns' NBA decision should not have an impact on Villanova's thinking.

Philahoops.com's Aaron Bracy, does not believe that St. Joseph's, La Salle, Drexel or Temple will be in need of a point guard. If he does not transfer to one of the Big 5 or Drexel, Chennault could end up at another school in the area, including a number of schools in New Jersey and Delaware as well as Penn State.

At PSU, Pat Chambers' familiarity with the Philly guard might bring him some attention. Chambers could use some backcourt help, losing two guards to transfers himself recently.

"We appreciate Tony’s efforts the past two seasons and respect his wishes to be closer to home for family-related reasons," Demon Deacons coach Jeff Bzdelik said. "We wish him the very best."

UPDATE: TheRecruitScoop now cites "a source with knowledge," claiming that "Villanova may make a push for" Chennault.