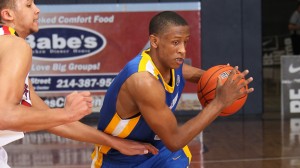 UPDATED (5:42p): The initial DailyPress.com blog post was edited recently (though no timestamp for the edit was posted) to note that Williams has now cut both Villanova and Virginia Tech from his list of schools. He will now choose between Kentucky, North Carolina and Georgetown.

While Williams was one of the biggest names that Villanova was involved with for the 2013 class, he was not the only one. Jay Wright has managed to get his program onto the shortlists of players like Aaron and Andrew Harrison, Allerik Freeman, and Jordan Washington. The 'Cats also remain in-play for a number of other elite prospects from the 2013 class.

All of the 2013 recruits on Villanova's radar are 4- or 5-star rated prospects.

According to DailyPress.com, Troy Williams will make his college decision, "probably in April." The Virginia-based 5-star guard/forward has been considering a list of five schools since December: Georgetown, Kentucky, North Carolina, Villanova, and Virginia Tech. If reports are correct, that list could be cut down to three schools in short order.

Virginia Tech isn't believed to be a strong contender for Williams, but is the only representative of his home state. Georgetown is the employer of his Aunt, who coaches the women's team there.

Williams' uncle, legendary AAU basketball coach Boo Williams, has been supportive of Villanova's inclusion on his nephew's list. Coach Williams has experience with Villanova and Philadelphia basketball after starring at St. Joseph's in his own college career and having recently coached Scottie Reynolds at the youth levels.

So far, however, the younger Williams has not visited Villanova's campus, which would seem to work against the Wildcats' when it comes time to cut his list down. He visited Chapel Hill recently, but not to meet with Roy Williams, his aunt's Hoya's were at the Dean Dome to play Georgia Tech in the women's NCAA Tournament yesterday.

An announcement in April is probably targeted to coincide with the Nike Invitational, which runs from April 27-29. The invitational is a notable AAU event that will be held at the Boo Williams Sportsplex, which is the home of Williams' AAU program, and the namesake facility of his uncle.