Share All sharing options for: Women: Bad altitude - Women out of WNIT 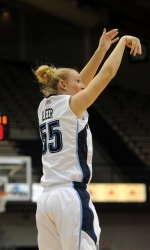 When their WNIT third-round match-up was settled, the Wildcats were packing their bags for a trip to Colorado. In Boulder, they played the Buffaloes closely, but ultimately suffered a heart-breaking 48-47 defeat. They finished the year with 19 wins.

Villanova trailed early, on the losing end of a defensive battle, but never fell behind by more than six points. The 'Cats finally took a lead with 4:03 left in the half, when a long 2-point jumpshot by Emily Suhey gave them a 15-14 lead. Colorado would score again at the 2:22 mark on a driving layup by guard Brittany Wilson, to go ahead 16-15 — they were the only points scored in the final four minutes of the half.

Colorado emerged from the intermission comparatively hot, going on a 11-2 run to take a 27-17 lead in the first four minutes of the second half. Villanova responded with a 14-2 run of their own over the next four and half minutes to go ahead 31-29, midway through the second half.

Colorado would go on another run to take a small lead back from the Wildcats. After they got ahead by six again late in the second half, Villanova's redshirt freshman center Emily Leer drilled a triple to cut the lead to 41-38 with 3:25 to go.

The Wildcats wouldn't quit, getting a defensive stop and a Megan Pearson layup to pull within one point at the 2:47 mark. The game would stay close for the rest of the game, but Villanova could not fight past Colorado's small lead.

Leer led the Wildcats with a career-high 16 points, going 6-of-12 from the field, 2-of-4 from three-point range and 2-of-4 from the free throw line. Pearson added nine points and five rebounds, while Lindsay Kimmel scored eight in her final collegiate game.

Villanova shot 35.3 percent from the field in the game after connecting on just 23.1 percent in the first half. The 'Cats were again without the services of leading scorer, Laura Sweeney, who broke her hand earlier in the postseason.

Villanova tied the record of 34 games played in a season, taking their all-time postseason record to 22-20, including a 6-6 mark in the WNIT. Villanova is 0-3 in the WNIT third round. They still lead the all-time series with Colorado, 3-2.

Temple also lost in the third round of the WNIT on Thursday night, falling 82-68 to the Syracuse Orange. There are no Philadelphia schools remaining in the postseason.