Share All sharing options for: Lax: 'Cats juice the 'Cuse 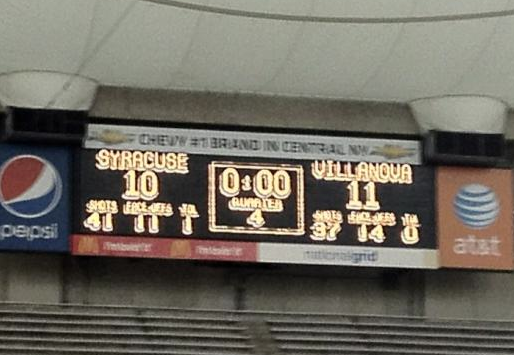 Syracuse had never lost a Big East lacrosse game and had defeated Villanova in all previous meetings. Both of those winning streaks were brought to a halt by a second-half surge by the Wildcats on Sunday afternoon. In a close game, the #15 Villanova lacrosse team knocked off the #8 Syracuse Orange 11-10 and improved their record to 5-3 on the season.

It was the first win for the Wildcats outside of the Commonwealth of Pennsylvania and an important victory in their Big East opener.

The Wildcats were down 7-5 at the half, with both teams exhibiting good ball control and having long possessions. Syracuse had four man-up opportunities in the first half, but failed to convert any of them, while Villanova received one advantage and also managed to squander the opportunity.

The 'Cats came out of the break on a hot-streak, quickly taking an 8-7 advantage with just under 7 minutes left in the third quarter. 'Cuse would come back, and the quarter ended with a 9-9 tie. Villanova would again take a lead, 11-10 with 5:05 left in the game — and the score would remain that way.

While the Wildcats trailed 8-6 at the face-off X after the first half, they performed much better in the last two quarters, including 5-of-7 in the third quarter.

The Orange had two chances to tie the score in the final minute, but weren't able to convert. Senior goalkeeper Dan Gutierrez did an excellent job in the net, making vital stops down the stretch. Syracuse went 0-5 on man-up opportunities during the game.

A crowd of 3,811 showed up to the Carrier Dome for the game, which was not bad for an NCAA tournament Sunday. Last season's match-up at Villanova Stadium drew a reported crowd of over 7,000.