Share All sharing options for: To be (Drafted), or not to be. 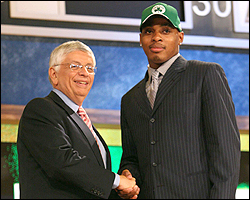 Randy Foye was a lottery pick in 2006

Maalik Wayns declared himself eligible for the NBA draft and hired an agent. Dominic Cheek may soon follow. One of them may have a chance to be drafted, but not the kind of sure-thing that usually drives young players into the professional ranks. Both of them apparently have other considerations to take into account, however.

"What’s going through his head?" a veteran NBA scout said about Cheek to ZagsBlog.com. "I mean, it’s crazy. What has he done that makes him think he can go into the draft?

"It doesn’t make any sense. He was higher-rated coming out of high school than he is now."

Cheek was the second-leading scorer for the Wildcats in 2011-12, but was inconsistent in his shooting performances and wasn't known as a great defender. He might have benefited from some offensive changes, however, and much of his shooting issues seemed to be from bad shot-selection. That in itself is a red-flag for the NBA, however, and Cheek's drop-off from his high school hype won't inspire much confidence.

"There’s a lot of extenuating circumstances that I can’t go in to," Jay Wright told the Associated Press about Cheek. "I can see on one side where it might not be a good idea. But there are other circumstances for him that would make it a good idea. We’re really trying to work through that right now."

As for Maalik Wayns, "I think it’s a mistake," the NBA scout said. "Maalik is a physically gifted talented scorer but I think he should go back to school."

Wayns was very close to leaving school after the 2010-11 season, his sophomore year. That fact was known to Jay Wright and was widely rumored as well. So much that basketball agents were in the loop and doing their best to lure the point guard to their firms. He ultimately opted to give his college career one more season, hoping that he could elevate his stock. It was no surprise to Wright that Wayns decided to leave school.

He was a second-team All-Big East selection as a junior and was the Wildcats' top-scorer.

"We can tell by his draft status he’s in the same place he was last year," Wright said to the AP. "Knowing that the NBA usually looks down on an older guy, he’s probably going to be more highly-rated coming out this year than he would be next year. That was his thought process and I do support it."

Both players have some level of external pressure on them to "make it" and earn money from their basketball talents. The NBA is obviously their dream and entering the draft is the way to get there, however unlikely.

It is a mistake if the NBA is the only option, but both players are likely capable of finding their way to a professional contract somewhere in the world — one that pays more than most of the class of 2012 will earn in the next calendar year if they play for a full season.

Some players can earn more abroad than they can in the NBA. Allan Ray realized that fact after one season with the Boston Celtics, when he asked for a release from his contract when the team traded for Kevin Garnett and Ray Allen in 2007. Ray signed a seven-figure contract with a team in Rome, Italy. Those sort of huge contracts aren't the norm, however and tend to fall to more notable names and players who spent at least a token amount of time with an NBA club.

A significant number of Villanova basketball alums in recent years have spent at least a few years in Europe if undrafted by the NBA. From stars like Ray and Corey Fisher to role-players like Reggie Redding, if a Division I starter is looking to extend their career abroad, opportunities tend to arise.

If Wayns and Cheek expect that they will play in the NBA next season, they could both wind up disappointed. If the goal, however, is to increase their income and earning power, it is both feasible and reasonable to expect that they can — but it may not be enough to support themselves as well as extended family.