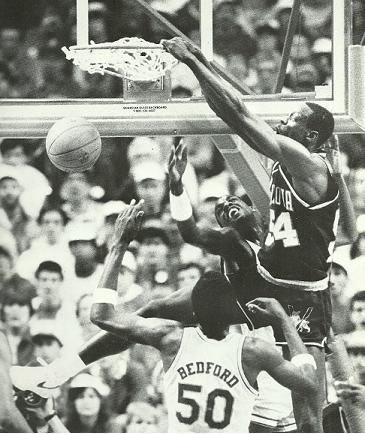 Things didn’t get any easier for the Cats in the National Semifinal Round. In Memphis State, they faced the nation’s #5 ranked team boasting a 31-3 record. They were led by All-America forward and the future #11 overall selection in the 1985 NBA draft, Keith Lee. The Cat’s, however, were a team on a mission. Memphis State would become the fifth victim in an incredible run for the Cats, who would take this one 52-45.

"Villanova coach Rollie Massimino, bristled at once again being in the shadow of his conference brethren. His Wildcats, who finished third in the Big East, had been the darlings of the NCAA tournament but were given little chance of emerging on top from a quartet that included Big East rivals Georgetown and St. John’s, against whom the Cats had been a combined 0-5 in 1984-85. "Hey, there’s two other teams here," Massimino noted two days before the Final Four. Still, the consensus was that the other semifinal between the Hoyas and Redmen would be the "real" championship game." (1)

"If Villanova was indeed just playing for second place, it took its task very seriously. The Wildcats worked their typical methodical, hard-nosed, smart and opportunistic style of play to perfection against the Tigers by containing Memphis State’s cat-quick point guard Andre Turner while aggressively attacking the Tigers’ towering duo of William Bedford and Keith Lee until foul trouble turned the pair into a non-factor. "We look bad, but we make the other team look worse," said Harold Pressley of his Villanova team that was being chided for "winning ugly". "Our plan is to frustrate the other team as much as possible with our offense and with our defense. We did it to Memphis State both ways." (1)

"A key stretch early in the second half epitomized the day for both teams. With Memphis State holding a 31-28 lead, Villanova embarked on a nine-point run that caused the Tigers to completely unravel. At one point Bedford, upset at a traveling call, hurled the ball away and was slapped with a technical foul. Twenty seconds later he then foolishly fouled Pressley after a rebound, and minutes later the All-American Lee fouled out of the game while pursuing a loose ball that he had no chance to get. Suddenly, the Tigers were down 41-33 and in desperation mode. ." (1)

"After the game, the frustrated Tigers would have no trouble pointing fingers and making excuses. The focus of their wrath was the officials. "I don’t know what’s going on. It’s amazing," said Lee, who had played only 23 minutes and scored 10 points before fouling out (he had also fouled out three years earlier in an overtime loss to Villanova in the NCAA tournament). "We barely touch someone and we get a foul. I don’t think we played a bad game. The refs just didn’t let us play. What do they have against Memphis State?" (1)

"Still, just when the Tigers looked finished, the Wildcats suddenly lost their way. With Lee out of the game, Memphis State was forced to use a smaller lineup that wound up frustrating Villanova, which went 7:17 without scoring a point as its eight-point lead was reduced to zero. "We let down a little bit. They couldn’t believe it (the eight-point edge) at the time. We got a little complacent," Massimino explained." (1)

"But as they had done all tournament, the senior-laden Wildcats kept their poise. Dwayne McClain, who would make 24 of 25 free throw attempts in the tournament, including all 7 in this game, sank a pair with 3 minutes left that gave Villanova the lead for good at 43-41. The cagey Cats got away with sending McClain to the line when in fact it was Pressley who had been fouled. "I could’ve used the two points," Pressley joked. "But Dwayne has been shooting outstandingly in the tournament so I let him do it." (1)

"McClain administered the coup de grace a minute later with a powerful dunk off a baseline drive that boosted the lead to four and prompted the Cats to go to their spread offense to work the clock and protect their lead. "I look forward to the (shot) clock next year. I think the fans want to be entertained more," Kirk griped." (1)

"Other Tigers besides Lee took shots at the officiating after the game. "A lot of the fouls we thought weren’t fouls," Baskerville Holmes said. "The refs called a very poor game. They say the Big East is such a tough conference. If they’re so tough, why do the referees protect them?" Kirk added: "They talk about the aggressive style of play in the Big East and how timid we are in the Metro Conference. Yet they shoot 26 foul shots to our 9." (1)

"Villanova’s Ed Pinckney stated that getting the Tigers in foul trouble was his team’s plan all along. "We knew Lee had been in foul trouble during the tournament," he said. "So we tried to take the ball to him as much as we could." (1)

"Whether Villanova got a boost from the refs or not, one of the most improbable stories in NCAA basketball history would receive one more chapter with the championship game on April Fools’ Day. But Kirk, for one, was seeing the rugged and resourceful Wildcats in a new light. "If they’re a Cinderella team," he said, "then Cinderella wears boots." (1)

In the other National Semifinal Game, Georgetown soundly defeated fellow #1 seed, St. John’s behind 20 points from Reggie Williams. Chris Mullin was held to 8 points in the loss. Villanova would face Georgetown in two days for the national championship as a decided underdog.

(1) Excerpts reprinted with permission of John Schaefer, author of The Villanova Miracle and 63 Other Dreams.