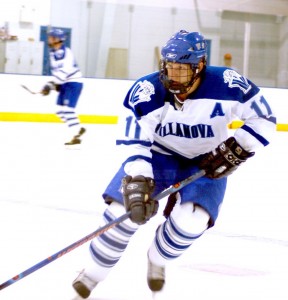 In a surprise move, the Villanova Board of Trustees met via teleconference on Sunday afternoon and voted to restore the Villanova Ice Hockey program to varsity status. The program, which had been cancelled in 1998 due to Title IX concerns, will be raised from club status back to the NCAA's Division I in the 2013-14 season and will compete in the Atlantic Hockey conference — replacing UConn, who will be joining Hockey East.

The move will also include a women's hockey program, thus alleviating any concerns over Title IX. The women's program will also compete in the Atlantic Hockey conference starting in 2013-14.

Villanova hockey's return was made possible by the generous donations of a group of hockey alumni who have been campaigning for the sport to be returned behind the scenes. The group was recently joined by The Hangover actor Bradley Cooper, who played hockey at Villanova during his freshman year at the school before transferring to Georgetown to follow his then-girlfriend. Cooper lent his star power to the cause and allowed the group to raise enough money to fund scholarships and equipment for the new men's and women's teams.

Unlike Penn State, which is building an $80 million arena to host their games, the Wildcats will not have that luxury. Instead, the school has agreed to host the majority of their games at the IceWorks Arena in Aston, Pennsylvania, with a select number of games at the Wells Fargo Center in Philadelphia, where the Wildcats have regularly played basketball since the facility opened.

"We're really excited about joining Atlantic Hockey," current club team coach Brian Griffin said over the phone. "That's what I would say if this story weren't a fabrication of VUhoops.com