Another Herron at Villanova?

Share All sharing options for: Another Herron at Villanova? 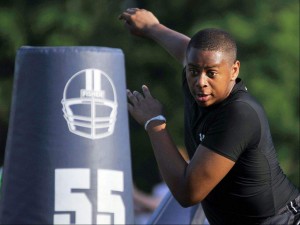 Justin Herron is a defensive lineman from Bullis School in Potomac, Maryland — and before you ask, yes, his father is one of those Herrons (Reggie), the trio of brothers who played for Villanova in the 1970s and 80s. He has one football scholarship offer, from his father's alma mater, but Herron is about to blow up.

He recently attended the National Underclassmen Combine East Five-star event in Robbinsville, New Jersey, where he impressed coaches and onlookers with his athleticism and quick burst. He is an agile 6-4, 270-pound player who can play on either side of the line of scrimmage, but prefers defense. He has already received interest from Duke, Maryland, Oregon, Virginia and West Virginia, in addition to his offer from Villanova.

Thanks to his strong family connection, he has visited Villanova's campus already. He will return to the Main Line in the summer to participate in one of the program's summer camps.

"Its a gorgeous campus, and one of the main things is the academics are important," he told Scout.com about Villanova. "They have really good academics and they have a really good law school."

"[Maryland] was really nice, the campus is gorgeous, the coaches are real nice, they know what they're talking about," he said, but he hopes to get out of his backyard for college. "I'm not really looking at Maryland."

"My dream school was Villanova. My dad went there for basketball, but they like me for football too," he said about his dad's alma mater. Even if BCS schools like Oregon and West Virginia start to offer scholarships, Herron may still take his talents to Andy Talley's program.

"The first school to offer me and I always wanted to go there."

Like many high school football players, Herron dreams of playing professionally someday. Plan B, however, is to go to law school. He will keep that in mind while sorting through the growing interest he will receive from schools between now and his signing day in February 2014.

Should he decide to follow his father's footsteps to the Main Line, he could become a cornerstone for the Villanova football program in the future.