So after an amazing streak of five straight tournament wins, the Cats were ready to take the big stage in Lexington to face the presumptive champion in a forty-minute formality preceding Georgetown’s coronation as king of college basketball. Of course, the Wildcats had other plans. They had played Georgetown twice before that season. On January 12, the two teams battled at the Spectrum. Georgetown entered that game winners of 25 straight, but the Cats took them to overtime, only to lose 52-50. The Cats won confidence in that game, learning they could go toe-to-toe with the Hoyas. Their second battle was on February 11 in front of 15,188 fans at Capital Centre in Landover. The Cats led most of the way, only to see victory slip away in the closing minutes of a 57-50 loss. In that one, the Cats learned their defense could stop the mighty Hoyas, holding them scoreless for over five minutes and shutting out Patrick Ewing for the first 12:36 of the game. Afterwards, John Thompson would say, "All everybody likes to talk about is St. John’s and Georgetown. If whoever draws Villanova in the tournament thinks they are getting a patsy, they’re in for a rude awakening." Truer words were never spoken. 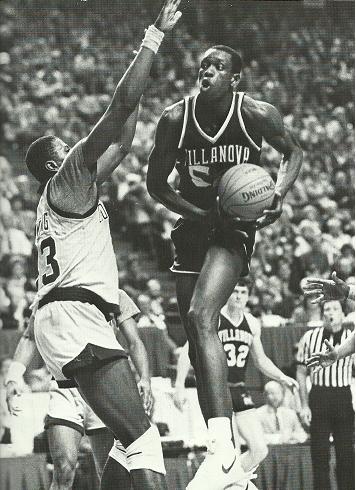 "Even Villanova coach Rollie Massimino seemed skeptical of his team’s chances of rocking the college basketball world by upsetting the seemingly invincible Hoyas. Sure, the Wildcats lost the two close regular-season meetings by a combined nine points. And there was no denying that Villanova came into the final game on a major roll, defeating the nation’s No. 2 (Michigan) and No. 5 (Memphis State) teams while playing its brand of tough, opportunistic basketball to perfection." (1)

"But still, Georgetown had been so utterly awesome all season, especially in its previous game, an 18-point annihilation of third-ranked St. John’s, that few thought the Wildcats’ magical run would last one more game. Even the Las Vegas oddsmakers pegged the Hoyas as a 9-point favorite. Because a Georgetown win seemed like a guarantee, much of the pre-game talk centered on where this Hoyas team ranked among the all-time championship teams, including the UCLA Bruins of John Wooden, who were the last repeat champs in 1973. Even Massimino was in awe: "They are the No. 1 team in the United States and probably one of the best teams ever assembled in the history of college basketball." (1)

"But on this April Fools’ Day, the joke would be on the so-called experts. The Wildcats did not play the "perfect game" that Massimino sought, but they were pretty darn close. They made 78.6 percent of their shots, including 9 of 10 in the second half, against the nation’s top-ranked defense. Point guard Gary McLain played all 40 minutes and only turned the ball over twice against Georgetown’s relentless pressure defense. Ed Pinckney more than held his own against the fearsome Patrick Ewing, producing 16 points, 6 rebounds and 5 assists to Ewing’s 14, 5 and 2 and wrapping up the tournament’s Most Outstanding Player award." (1)

"From the outset, the Hoyas dipped into their notorious bag of intimidation tricks, with Reggie Williams telling Dwayne McClain that he was going to "kick your butt" and Michael Jackson sticking his finger in McLain’s face after a turnover. Williams even took a swipe at Villanova’s Chuck Everson at the end of the first half. But the Wildcats never retaliated or lost their cool. "That’s not classy," McLain said of the incidents. "The classy program was going to win this championship. We’re very classy." (1) 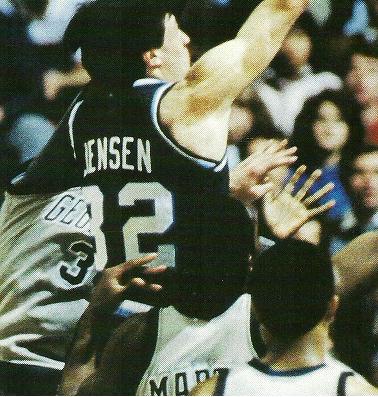 "Villanova was also lucky in the sense that this was the last NCAA tournament to be played without a shot clock. In their earlier losses to the Hoyas, the Wildcats had sometimes been pressured into taking poor shots thanks in part to the Big East conference’s 45-second clock. But in the final, as during the enter tourney, the Cats thrived without the constraint of a clock, patiently probing for good looks in their spread offense and frustrating Georgetown into 22 fouls. Villanova capitalized by making 19 of 23 free throws in the second half." (1)

"Despite all they did right, it still almost wasn’t enough for the Wildcats. Georgetown demonstrated why it was considered an all-time great in going 35-2 on the season by sticking close to its inspired opponent. Both teams got off to a blazing start, with Villanova making seven of its first eight shots but still trailing 20-14 thanks in part to eight quick points by Williams. Georgetown coach John Thompson then made the questionable decision to take out the red-hot Williams, saying that he "was winded." Williams seemed to lose his touch and was held scoreless in the second half." (1)

"Early in the second half, Villanova took a 6-point lead and still held a 53-48 edge before Georgetown snapped back. When David Wingate drained a 14-foot jumper with 4:50 left to give the Hoyas a 54-53 lead, it seemed that their 18th straight win and second consecutive national title were near. But Bill Martin threw the ball away with 3:30 remaining after the Hoyas had gone into their own spread offense in order to milk the clock, setting the stage for perhaps Villanova’s most unlikely of heroes." (1)

"Harold Jensen, an often overlooked backup guard, coolly sank an 18-footer from the right wing with 2:35 on the clock to give Villanova the lead for good at 55-54. "If I’m wide open, Coach (Massimino) always tells me to put the ball up in that situation. And, fortunately, it went," said Jensen, who made all five of his shots and four of five free throws after averaging only 4.5 points per game during the season." (1)

"Villanova’s deadly shooting extended to the free throw line, from where the Cats scored 11 points down the stretch. Jensen himself twice sank both ends of one-and-one situations, helping Villanova build a 61-54 lead with 1:10 remaining. Before he attempted his second one-and-one, Jensen kissed the bald head of 78-year-old wheelchair-bound trainer Jake Nevin, who was battling Lou Gehrig’s Disease and had become a fixture on the Villanova bench during the tournament. "This one’s for you," Jensen told him." (1)

"Jackson’s layup with five seconds to go cut the Hoyas’ deficit to two, but since Georgetown had no more timeouts it appeared that Villanova would not need to inbound the ball before time ran out. However, a quick-thinking Wingate knocked the ball into the stands and the officials, instead of calling a technical foul, merely stopped the clock. As the Wildcats tried to throw the ball in, McClain was knocked to the floor but Jensen inbounded the ball to him anyway. The senior clutched the ball until the clock showed all zeroes, touching off a wild celebration.

"I was going crazy down there on the floor waiting for the buzzer," McClain would later say, If you watch the tape, you can hear me yelling" McClain crowed amidst the jubilation. "It’s not a miracle to me," Pinckney said. "I knew we could win all along." (1)

"The Hoyas remained feisty, even in defeat. "We might not have won the ball game, but I still think we’re No. 1," said Ewing, who struggled with Villanova’s 2-3 matchup zone and got off only one shot in the game’s final 13 minutes. Thompson was gracious in defeat, saying, "Look at their percentages both from the field and the free throw line. Villanova won the game fairly. We have no complaints." (1)

Twenty years later in Tales of the Villanova Hardwood, Ed Pinckney wrote, "More than anything, Gary McLain made the difference. Georgetown beat everyone into submission with their press. We jut got more and more confident as the game wore on because Gary was beating their press time after time. I think our shooting accuracy came from knowing Gary was going to get the ball upcourt every time."

"Fans of basketball weren’t complaining, after they had witnessed one of the great upsets in the sport’s history, performed by a team of overachievers who had played the game of their lives. Hours before the game, Massimino had sent his players to their hotel rooms for 15 minutes to, in his words, "think about two things. One, play with the idea to win, not of losing. Two, tell yourselves you’re good enough to win. In a one-shot deal, you are good enough to beat anybody." Villanova turned the power of positive thinking into a near-perfect performance that would stamp them for all time as the kings of the Cinderellas." (1)

(1) Excerpts reprinted with permission of John Schaefer, author of The Villanova Miracle and 63 Other Dreams. 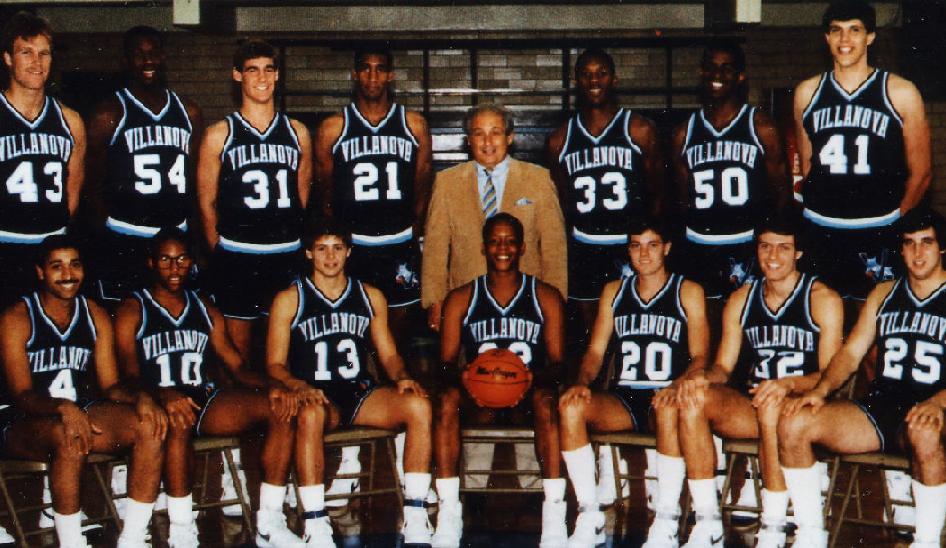