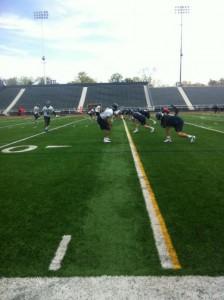 After a 2-win season, Villanova football has plenty to prove in 2012 and the path to accomplishing that begins this spring. Villanova started just one senior in 2011, which means that almost everyone will return in the fall, a year older and better prepared for the challenges of the college football season. With spring practices now underway, the Wildcats are making progress toward greater success in the fall.

"Well it’s been a good spring," head coach Andy Talley told CBSPhilly.com. "Really pleased with the effort that the players have made.

"We still don’t have a lot of seniors in our program but it’s a young football team with a lot of experience. We have 21 starters back. And you can tell the difference. We’re a little bigger, faster and stronger this spring and I’m pretty excited about this group."

Norm White returns to the team after missing all of 2011, his senior season with a lisfranc injury. He rejoins a stacked WR corps that will be a major strength on a team that will also rely on a trio of talented running backs this season.

Offensive lineman, Chidozie Ekweozor also missed the entire 2011 season with an offseason knee injury and is not returning for a fifth year in the 2012 season. The Wildcats will instead look to freshman Vince Kowalski at right tackle in the fall, after he started a number of games there as a freshman. Kowalski was undersized at tackle in the fall, but reportedly gained 35 pounds in the winter lifting program. The offensive line overall looks ready to get more "push" in the fall.

Starting center Dan Shirey has been sitting out recent Spring practices, after suffering an injury.

Another name missing from the spring practice field has been Leighton Dennis. The rising-junior cornerback has opted to transfer from the program. He spent most of the 2011 season playing behind James Pitts on the cornerback depth chart.

So far, the offense has looked slightly ahead of the defense in practices, with the 'Cats searching for consistency and needing to replace James Pitts on the field. The running game in particular has been a strength and has benefited greatly from the improved run-blocking. Defense has been improving in spring practice however.

"We needed to make sure our defense could improve, and it looks like they are improving throughout the Spring," Talley said.

At quarterback, Chris Polony still appears to be a step ahead of John Robertson, but both players have been effective running the option offense. Having talented and experienced targets like White, Joe Price, Dorian Wells and Jamal Abdur-Rahman will help both in the passing game. Former quarterback Dustin Thomas also joins the receivers, backing up White this spring and will provide another pass-catching option and will potentially have a package of plays drawn up for him.

"We're six-deep at wideout, so I'm really pleased with that group," the coach said. "I think we have two very good running backs in Austin Medley and Kevin Monangai – really like both guys, a lot of quickness.

Spring practices are just the start. Most, if not all, of the freshman recruits will arrive on campus once the summer academic session begins, to take classes and start working with the strength and conditioning coaches. In August, the team straps on the pads once again for preseason training, and that is when the freshmen will be given the chance to prove themselves and fight to carve out a role for themselves.

On defense, the Wildcats added a number of linebackers and defensive backs that will be able to help the team. The defense will also add depth in the trenches, and former tight end Brennan Erbeznik will contribute to that depth, making the switch to defensive end this spring.