First and last trip to Atlanta for Football

Share All sharing options for: First and last trip to Atlanta for Football 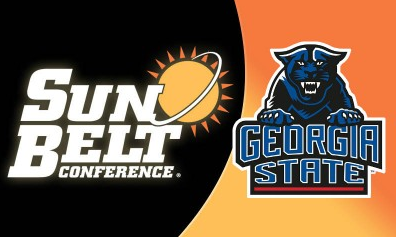 One day ahead of the CAA's scheduled vote to raise their paltry $250,000 exit fee for basketball and olympic sports members to $1 million or more, Georgia State opted to accept an invitation to join the Sun Belt conference. The Panthers will play the 2012-13 academic year as a lame-duck member of the CAA conference before moving to their new home in 2013-14. The move was announced today at the Georgia Dome.

"Georgia State's withdrawal from the CAA and CAA Football is predicated on the university's desire to reclassify to FBS football which requires membership in an FBS league," CAA Commissioner Tom Yeager said in a statement. "We've been aware that GSU was having discussions with the Sun Belt Conference as the CAA could not accommodate that desire within GSU's timeframe. The conference wishes the university well as it pursues these new interests."

Georgia State was a founding member of the Sun Belt in 1976, but moved on to the Atlantic Sun and eventually to the CAA, in search of a better and stronger home for basketball and Olympic sports teams. Football was never a consideration at the time, because the Panthers did not sponsor a football team until recently. The school voted to create a football program in 2008, and played its first game on September 2, 2010, a blowout victory over Shorter University.

They have played their home games at the 71,000-seat Georgia Dome since the program first took the field in 2010. In two years of play, the program has compiled a record of 9-13, with their most high-profile moment being a 63-7 slaughter at the hands of the Alabama Crimson Tide at the end of their first season. They went 3-8 in their sophomore campaign, with kicker Bo Schlecter filling in at quarterback for a stretch of time.

This fall was slated to be their first season as a full member of the Football Championship Subdivision (FCS) and as a football member of the CAA. Now it will be a year-in-transition to the Football Bowl Subdivision and their only year playing a CAA football schedule. The 2013 football season will also be a transition year as the Panthers complete the requirements of the NCAA to reclassify as an FBS school, and they will not be eligible for the postseason or to win a conference title until 2014.

Villanova is scheduled to play the Panthers at the Georgia Dome on October 20th, which will now likely be the Wildcat's first and last game against the Atlanta-based university.

GSU Director of Athletics Cheryl L. Levick added, "Under President Becker's leadership, Georgia State University is growing in size and stature as one of the nation's leading urban research institutions, so it is only fitting that our athletic program moves to the top level of college athletics.

In terms of investment, GSU won't have to dramatically increase its financial commitment to football with the move. The program opened an indoor practice facility in August 2011, prior to last season and leases a stadium suitable for hosting FBS football contests already. The biggest change may be the addition of 22 scholarships, which will add some expense to the school's annual spending.

Their current football budget compares favorably with the Sun Belt members, however. Clocking in at a reported $4,266,691, their spending is already higher than Sun Belt members, North Texas, Louisiana-Lafayette, Arkansas State and Lousiana-Monroe. That budget will increase with additional scholarship awards, and the Panthers program may also choose to raise salaries for some program coaches as well.

Only two Sun Belt institutions reported a football profit, Florida International and Troy University. The conference does not generate much television revenue, so members need to find other sources of revenue, which may include institutional subsidies. For Georgia State, however, the move makes sense, as the Sun Belt conference will still generate more football exposure than FCS football provides and the annual losses will likely be similar.

CAA football is now be slated to have just 9 football members in 2013, but reinforcements may be on the way. Rumors connecting the conference to Stony Brook University (and others) have heated up again recently.

With another member on the way out of the CAA football conference, Villanova has thus-far remained in a holding pattern with the Big East conference. The status of the Wildcats program may not be decided soon, but a resolution could come quickly after the Big East's television rights negotiations take shape. In the meantime, Villanova will move ahead with CAA football.

As VUhoops.com reported in February, the school has an immediate plan to renovate the existing football weight room and locker rooms within Villanova Stadium. Work on those projects is likely to commence after the 2012 season. The athletics department prioritized those items at the request of coach Andy Talley, who wanted to be able to show recruits those improved facilities in the short term, rather than showing them architectural drawings of a larger facility that might be constructed over a longer term.

That larger facility is still a possibility for Villanova, however, and reportedly would be fast-tracked if the program were to move to the Big East.

Villanova is already among the top-spenders in FCS football, with only Delaware and South Alabama spending more money on an annual basis. With a budget well over $5million, the Wildcats spend more annually than 7 Sun Belt football programs and 3 in the MAC. If a move to the Big East were made, the Wildcats' annual football budget would likely triple (or more) in order to reach a level comparable to the other members of the conference — Big East football budgets currently range from $11,599,780 to $19,494,263.