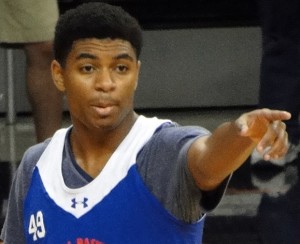 Boo Williams has most-recently sent Scottie Reynolds to Villanova and had advised his nephew Troy to consider the Wildcats as well. Freeman is interested in Villanova and Kansas and had cut his list to just those two before deciding to allow UCLA and Ohio State get back into the picture in the last few weeks.

Boo Williams Elite will take the court at the Nike EYBL event in Minneapolis on April 20-22. They will likely also participate in the second EYBL session in Hampton Virginia, immediately following it.

Sam Cassel, Jr. is closing in on a college choice after committing and decommitting from Maryland a little over a week ago. Since then, he has taken visits to a number of schools and considered his options with his father's input. The 3-star, 2012 shooting guard has scheduled a visit to South Florida for this weekend, but according to the Tampa Bay Times, he has cut his list down already:

"He's down to Maryland, South Florida and Pittsburgh," said Ryan Hurd, Cassell's coach at Notre Dame Prep in Fitchburg, Mass. "I would be surprised if there's another visit. I think he's pretty much honed in on these three schools."

He visited Pittsburgh last weekend, and had also been considering Villanova and Florida State (his father's alma mater). Now with Villanova out of the picture, the list of 2012 recruits that the 'Cats remain in the discussion for continues to dwindle.