Share All sharing options for: Villanova takes to Groupon to sell tickets 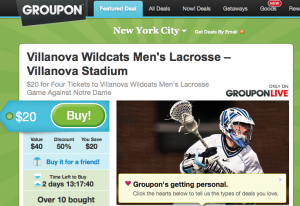 Villanova has resorted to using deal-of-the-day website "Groupon" to peddle tickets for an upcoming lacrosse tilt with Notre Dame. It is a game that should sell itself, two popular schools battling in a sport that both have been very good at lately and the winner will likely take the regular-season Big East title. Despite having those things going for it, the ticket sales appear to be lacking, forcing Villanova to try this measure.

The service has been similarly used by schools like Cincinnati and Boston College to sell football and basketball tickets.

The site offers its users a "Groupon" — a combination of "Group" and "Coupon" — offering a discount on a good or service that becomes available only if a certain minimum number of users sign up for it. Villanova's minimum was apparently set at 10 purchases, according to the site. For this deal, Villanova is offering four tickets to the Notre Dame game for $20. Tickets normally carry a face-value of $10, while season tickets cost just $30.

According to the Groupon's pitch for the deal:

Like flying-trapeze artists, lacrosse balls need a durable net to fall into, or else they refuse to leave midair until their meals are launched to them from a T-shirt cannon. Witness deal-breaking mesh in action with this GrouponLive deal to see the Villanova Wildcats men's lacrosse team play the Notre Dame Fighting Irish at Villanova Stadium. For $20, you get four general-admission tickets on Saturday, April 21, at 5:30 p.m. (up to a $40 value). The kids' Fun Zone opens at 4 p.m.

Villanova has been using the splash-page of Villanova.com to promote the Big East lacrosse tournament, which will be held for the first time ever at Villanova Stadium at the conclusion of this season. The athletics department is hoping that they can be a success hosting the first ever incarnation of the event, but getting fans to show up for regular-season games is also still a priority.