Georgia State's president notified the commissioner of the CAA on Sunday that his school would be withdrawing from the conference and the football conference as well. The Panthers are joining the Sun Belt, in a move designed to get the university into the ranks of those who play football at the FBS level. Commissioner Yeager released a statement in response to the move on Monday afternoon, that contained a statement that proved very interesting.

"Georgia State's withdrawal from the CAA and CAA football is predicated on the university's desire to reclassify to FBS football which requires membership in an FBS league," Yeager said. "We've been aware that GSU was having discussions with the Sun Belt Conference as the CAA could not accommodate that desire within GSU's time frame. The conference wishes the university well as it pursues these new interests."

One easily-overlooked and vague phrase caught the eye of a few observers.

as the CAA could not accommodate that desire within GSU's time frame.

A statement that seems to suggest that the CAA might have been able to accommodate Georgia State's desire to play Bowl Subdivision football on some other time frame. There was no explanation attached to the statement to further illuminate what the commissioner meant by it.

CAA Football assistant commissioner Scott Meyer, advised on Twitter to, "read into it as much as you prefer, but [Yeager] doesn't want to rule out anything in terms of league/membership opportunities."

The CAA will now look to expand and strengthen its brand in football, but with many of the top FCS teams seemingly on the verge of making the commitment to FBS football, the long-term options may be limited. If the CAA could become an FBS conference, however, they could perhaps lock in most current members studying a move up and attract other top FCS programs to join the conference. 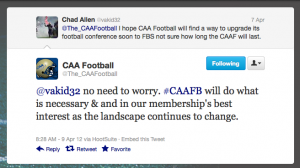 That would seem to suggest that the CAA couldn't just declare itself an FBS conference and invite all of its members to upgrade their programs. They would need to acquire at least 8 schools that were already participating in the Bowl Subdivision in order to become an FBS conference and be able to offer invitations to the current FCS members.

NCAA bylaws aren't immalleable, however. The CAA could request a waiver to that bylaw, allowing the conference to classify as FBS without the minimum number of FBS members. They could also look for a change in the NCAA's bylaws to create a formal process for an entire FCS conference to reclassify to FBS. The likelihood of the NCAA rubber-stamping either proposal isn't easy to determine, but the CAA probably can't be assured of anything. In fact, the recent enactment of some of these bylaws might make NCAA members hesitant to change them so soon.

That isn't the only roadblock for the CAA in any such plan to become an FBS conference; it isn't clear that all or even most of the 9 remaining football members would want to move up to FBS. Villanova has flirted with the Big East, but would they be willing to field an football program in an FBS CAA? Rhode Island has opted to downgrade their program to the limited-scholarship NEC — not every member of the current CAA necessarily has aspirations of playing football in the big time.

Then there is the matter of bowl games. There are a finite number of bowl games, currently, and they are almost all locked into deals with the 11 current FBS conferences for the foreseeable future.

"Lets pose that question," Yeager said about the issue last summer. "We’ve got a great TV package, we’ve got great rivalries, it all kind of flows until you get to the postseason. You’d have to invent a couple more bad bowl games, because the present ones are already spoken for.

"When you are going through the playoffs, you’re national champions, you didn’t just win the International Bowl in Toronto that nobody went to. So that’s the debate. We’re comfortable in our skin. I think the FCS can be in the 20-30,000 seat [range] in attendance and be very good."

Current conference realignment could create some bowl openings, as could a proposed move to require teams to produce 7 victories instead of 6 during the regular season to become eligible to play in a bowl game. Up to 12 current bowl games could end up on the chopping block in that scenario, but another FBS conference might give a few of those a reprieve. None of the bowl tie-ins would be major ones, however, and a CAA football school would still likely struggle to get into the national championship picture, even with coming changes to the postseason format.

Changes are coming for the CAA. The most likely change being that new football-playing members are likely to be introduced sooner than later. Will there be other changes coming? That may all depend on how you read commissioner Yeager's statement.