Cheek could decide this week

Share All sharing options for: Cheek could decide this week 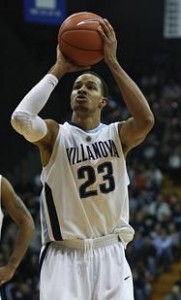 After Maalik Wayns announced his intentions to leave Villanova early and enter his name in the NBA Draft, additional rumors began to swirl that Dominic Cheek could join him. Though the NCAA allowed players to declare themselves eligible and change their minds up until Tuesday at midnight, the NBA will allow players to register their names for their draft up until April 29th, which is the deadline that many players still on the fence will live by.

A new report on Philly.com suggests that Cheek could make his decision by the end of this week, however, and according to multiple reports, he is leaning toward turning pro.

His draft stock is as low as it has been in his career after a disappointing Junior campaign, but some observers believe that he would turn pro to pursue a career abroad. His family's financial situation will play into his decision-making, and he may feel pressure to earn money to support them.

If Cheek decides to leave school, Villanova will have just 10 scholarship players on the roster for 2012-13. It would leave the Wildcats with just two seniors, Mouph Yarou and redshirt senior Maurice Sutton. The 'Cats are still pursuing transfers, Dylan Ennis, who is believed to be highly-interested in the program, and Tony Chennault, who may be eligible for a waiver to avoid having to sit out for a season.

Dylan Ennis is expected to visit Villanova this weekend after earning all-rookie honors in Conference USA in 2011-12.