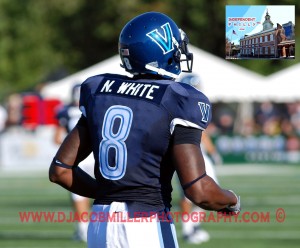 Last fall, a revolving door at quarterback was one of the reasons why the Wildcats didn't seem to put things together on offense until late in the season. The lack of offense may have even contributed to defensive struggles, forcing that unit to spend more time on the field. Villanova would ultimately give freshman quarterback Chris Polony (an engineering major) a second chance and in his reprisal, the Wildcats' offense picked up late in the season.

Polony's resurgence was highlighted by a brilliant performance on a road trip to Massachusetts. On that performance, head coach Andy Talley said that, "He probably played as well as any quarterback in any one game since I have been here."

The praise wouldn't last, however, and Polony ended the season two weeks later with a whimper, throwing for just 139 yards and two interceptions.

Despite the high praise, the quarterback position remains a battle this spring. John Robertson suffered an injury in his one play during the Mayors Cup game and the coaching staff decided to take the opportunity to redshirt him. Robertson has played well enough in the spring that the competition at quarterback could remain unresolved into the summer.

"They are both competing extremely well," Talley said. "The one thing that stands out is the improvement each player has made from last season. I am very pleased with both of them and I would expect the competition to carry over into preseason camp."

Ultimately, Talley hopes that he can pick one of the two and ride them at quarterback for the entire 2012 season.

"Every coach would like to have one guy that is the guy," Talley told Philly.com. "We're not quite to that point yet."

Polony did progress last season, enough that the coaching staff felt comfortable moving last season's opening game starter to wide receiver. The young quarterback adjusted to the speed of the game and made better decisions as he came along. Now, he needs to continue his progress, and coaches want him to get more vocal and lead.

For Robertson, being vocal was never an issue. John Robertson has been more of a running quarterback, which works reasonably well in Villanova's offense. He will need to make the passes to unseat Polony from the pole position in this race. The Wildcats have too many weapons at receiver to ignore the passing game; Norm White is a potential NFL draft pick and will be a tremendous mismatch in FCS games.
Last season, Robertson was being prepared to run a set of plays out of the Wildcat package and Polony was supposed to be the freshman quarterback that would redshirt, but those plans changed. If Robertson doesn't win the starting job, he may still appear in games to run the Wildcat package in 2012.

Either one will have a talented set of running backs behind them. At the end of the 2011 season, Austin Medley and Kevin Monangai changed their jersey numbers to 1 and 2, respectively, and they intend to be a 1-2 punch that picks up yards and wears down opposing defenses.

"I really like our running back situation. Austin Medley and Kevin Monangai give us a great 1-2 punch in the backfield," Talley said. "They are both bigger, stronger and faster.

"Austin is at the point where he is back to having breakaway speed. Kevin now has a much better grasp of the offense and looks very comfortable."

Austin Medley scored 4 times while rushing the ball and once more as a receiver in 2011 while playing in just 8 games due to an injury, but finished the season as the Cats' number-1 back. Medley averaged 5.2 yards per attempt running, which was the best among Wildcat running backs (recievers Jamal Abdur-Rahman and Dorian Wells had 7.7 and 7.9 yards per attempt respectively).

Monangai also played in just 8 games after suffering a mid-season bout of mono. He also performed well, showing an ability to pick up yardage during his season and will benefit from improved blocking this spring and fall. He also spent part of the off-season working out and catching balls from his old high school quarterback and should be an improved threat to catch passes out of the backfield.

Villanova's wide receivers were a strength going into the 2011 season and will again be a strength going into 2012. The group is so deep that the coaching staff was able to move Corey Reeder to cornerback with a degree of confidence and he will now compete on defense to try and fill James Pitts' shoes.
"This might be the deepest group of wide receivers that we have ever had," Talley noted. "We have six or seven guys that can be put into the game."

Norman White sat out the 2011 season with a lisfranc injury and returns to the depth chart at full strength. He does not appear to have lost anything from his time off, and has impressed in Spring practices.

"He is the premier wide receiver in our league. Joe Price, Kenny Miles and Dorian Wells are also excellent compliments to Norman. Jamal Abdur-Rahman gives us a big play performer in the slot."

The tight ends will also be able to contribute this fall, with Earnest Pettway emerging as a legitimate receiving threat. He worked his way into a starting role last season and will likely hold on to that job, while Morgan Craig serves primarily as a blocker.

Talley expects the offensive line to have quality depth this season. The younger linemen got great experience last season, but will benefit from the offseason program to get them more ready to perform in the fall. The loss of starting center Dan Shirey to an achilles injury has caused the program to shift players around on the offensive line this spring, but all have reportedly responded well.

Shirey is out for the remainder of spring practice and could be lost for the entire 2012 season — his recovery will be closely monitored and a decision will be made before the season whether he will use a medical redshirt.