LAX Cats Weather Storm ... Villanova.com reports that "led by a pair of goals from senior C.J. Small , No. 12 Villanova (8-4, 4-0) scored four unanswered goals to start the fourth quarter and rallied past St. John's (6-5, 2-3) for a 10-8 victory at Villanova Stadium [this] afternoon. With the win, Villanova became the first team to clinch a berth into the inaugural BIG EAST Championship, hosted by Villanova May 3 - 5 at Villanova Stadium."

Arcidiacono's 'Back' … After missing his senior year at Neshaminy due to back surgery, Villanova signee Ryan Arcidiacono returned action on April 4 leading his Bucks County All Stars with 17 points and 7 assists to a Round of 16 win over DeStefano Electric in the Donofrio Classic. In the quarter final game on April 11, Arcidiacono scored 20 points, but Bucks County lost to Team Philly behind 28 points from Rysheed Jordan, the #34-ranked player in the Class of 2013. "[Ryan] played vey well, was smooth out there," Bucks County coach Jim Kenny said. Arcidiacono heads to U.S. Olympic Training Center in Colorado Springs on June 5 to try out for Team USA in the Fibas America U18 Tournament, to be held from June 16-20 in Brazil.

Blame Grandma ... CBS Sports reports that family considerations were the main factor behind Dominic Cheek's decision to bypass his senior year at Villanova and make himself eligible for the NBA Draft. "It was based mostly on [financial considerations]," Cheek told the Philadelphia Daily News. "I'd do anything for my family. The neighborhood where I'm from is one of the worst in the city. My grandmother lives in the projects. She's taken care of three kids. I just want to get her out of there. That's what I'm trying to do." "[Dominic and I ] talked a lot," Coach Jay Wright told the Philadelphia Daily News. "There's a lot to this, and I admire the way he's handled it. With his situation, it might be better for him to do it now. It wasn't a decision he made quickly."

Turkey-Bound ... DraftExpress.com does not project either Cheek or Maalik Wayns to be selected in the NBA Draft on June 28. The loss of both Cheek and Wayns leaves Villanova coach Jay Wright with a huge void to fill. Suddenly, Villanova went from a team with four seniors to two."We’re losing 30 points a game, and that’s what I’m thinking about right now," Wright said. [Editor's Note: other than, of course, how smart I was to sign a long-term deal after the Final Four in 2009.] 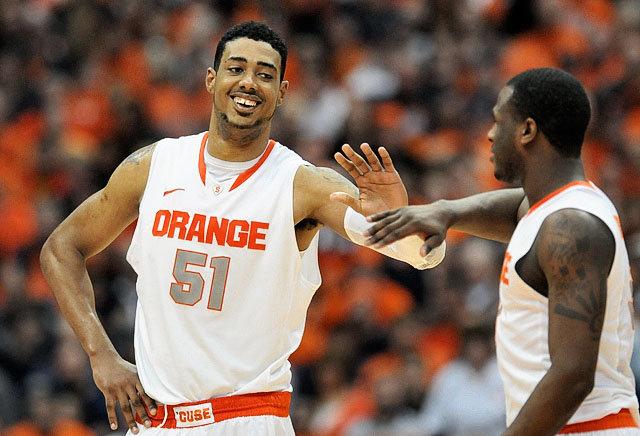 I'll Miss Early Morning Classes Most of All ... Other Big East stars who have declared for the 2012 NBA Draft include: Syracuse stars Fab Melo (7-0, C, SO) and Dion Waiters (6-4, G, SO), Georgetown's Hollis Thompson (6-8, SF, JR), St. John's Moe Harkless (6-8, SF, FR) and Connecticut's Andre Drummond (6-11, C, FR). Players had until April 10th to test the waters without hiring an agent. They then have until April 29th to officially make a decision on entering the draft. Expect more announcements over the next two weeks. [Editor's Tongue In Cheek Note: After two years at Syracuse, Fab is only 115 credits shy of graduating. He was frequently heard gushing how he loved the academic side of college life and that when his basketball career is over, he'll have the next 50 years to earn his degree. That might be cutting it close, Fab.]

Love Ya Coach Calhoun, but ... Adding to UConn's woes, ESPN reports that "forward Alex Oriakhi will transfer to Missouri. He has one year of eligibility and can play immediately because UConn is banned from next season's NCAA tournament.

Prediction? 'Pain' ... Matt Norlander of CBS Sports foresees more of the same for the long suffering Nova faithful, with a predicted ninth place finish in the Big East conference next season and a conference record of 8-10. Mr. Norlander's top three next year will be Louisville, Syracuse and Marquette, in that order, with sub-par seasons expected for perennial powers Pittsburgh (eighth) and Connecticut (eleventh). St. John’s is predicted to finish dead-last.

My Work Here Is Done ... ESPN reports that Jay Wright mentor and "Hall of Fame coach Larry Brown will interview with SMU on Saturday for the Mustangs' coaching vacancy, a source told ESPN senior writer Andy Katz. "I'm not going to be politicking for a job right now," the 71-year-old Brown said. "I'd like to get back involved in the game in some capacity. Whether that's as a coach, assistant, running a team or just as a resource, I don't care." [Editor’s Note: It sounds like Brown was there for the taking if Jay Wright wanted him on his bench.]

Help? Is On the Way ... Philly.com reports that "former Wake Forest basketball player Tony Chennault is scheduled to visit Villanova on Thursday. The 6-foot-2 point guard is strongly considering transferring to the Big East Conference school. Chennault, who just completed his sophomore season, will have two seasons of eligibility remaining. The Neumann-Goretti High School product started all 31 games last season for the Deacons and averaged nine points and 2.8 assists."

Finally Some Good News .... Villanova.com reports "women's basketball junior forward Jessica Wamala has been awarded the prestigious Truman Scholarship. Wamala is a Honors Political Science and Arab and Islamic Studies major. The mission of the Harry S. Truman Scholarship Foundation is to find and recognize college juniors with exceptional leadership potential who are committed to careers in government, the nonprofit or advocacy sectors, education or elsewhere in the public service.