Share All sharing options for: Duke's Gbinije Considering a Transfer to 'Nova 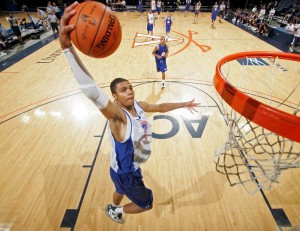 Updated 4/16: Duke University has now put out a press release confirming that Gbinije will transfer out. According to SNY, the list of schools that have called to ask about him include Rutgers, Georgetown, Syracuse, Villanova and Alabama.

His father reported that Coach K encouraged Gbinije to stay at Duke, promising that his role would change next season. The decision wasn't final until this morning, however, with the player believing that he needed a fresh start.

Michael Gbinije, a freshman 6'7" forward at Duke is considering leaving the Durham school. The Chester, VA native is reportedly considering a transfer to Georgetown or Villanova per Mike Miller at NBCSports.

He played in 19 games for the Blue Devils as a freshman tallying a mere 111 minutes and scoring 33 points. He is a jack of all trades who can shoot, but isn't necessarily the best player in any category. He is a good scorer, He was ranked the number-7 small forward in his class coming out of high school. He was part of a top-rated recruiting class at Duke that was highlighted by Austin Rivers, who has entered the NBA Draft.

Despite his talents, Gbinije did not see much action as a freshman at Duke and he didn't figure to earn much more next season. Gbinije had seem some criticism for his defensive prowess, but he has great size at the 3, and could certainly develop in that area.

There has been no official announcement of the transfer and the only report of it thus-far has emanated from the Duke fansite, DevilsIllustrated.com.

Villanova had reportedly offered him a scholarship while he was in high school.

More to come as the story unfolds...