Where have all the passes gone?

Share All sharing options for: Where have all the passes gone?

Vaughn McClure recently took a look at Derrick Rose's game, and the first thing he thought of was passing. The scoring point guard for the Chicago Bulls has a tendency to do his passing in the air — and according to the Chicago Tribune writer, Rose has been drawing criticism for his jump-pass predilection. 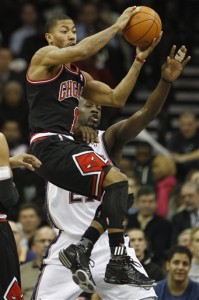 "That's just the way that I play," he told the Tribune. "But with those passes, I don't get that many turnovers off them. When I jump, I know where I'm throwing the ball. And it's usually a hard pass. I just try to hit the open guy."

Magic Johnson scored over 17,000 points in his NBA career, but had 10,141 assists as well, in 13 seasons. The Dallas Mavericks lead the league in assists-per-game while riding a passing game to last season's NBA title.

According to McClure though, the pass is a lost art in the NBA. Professional offenses eschew bounce passes and often fail to timely swing the ball. Today's NBA runs on isolation plays and pick-and-roll offenses and imitation is commonplace in all sports, leading college coaches to adopt many of the same strategies.

In college football, we discuss whether teams run the "pistol," "spread-option" or if they have a "pro-style" offense, and when it comes time for a quarterback to prove himself to the scouts, the ones who have success in "pro-style" offenses seem to be viewed through a less-critical lens. Can a quarterback that succeeded in a shotgun or pistol offense learn to throw off of a three-step drop?

Can a point guard who ran a pass-heavy offense in college learn to master the pick-and-rolls and isolation plays that NBA coaches love? Or will they become less effective without the passing game to set things up?

When you can see a player operate in the same offense you would plan to put him in, projecting his success as a professional becomes much easier.

Whether the passing game should have an NBA-renaissance is largely irrelevant to the college game. Just as the USC Trojans churned out an insane number of NFL-draft pick quarterbacks (from Carson Palmer to John Booty to Mark Sanchez) using Pete Carroll's pro-style offense as a showcase, top college basketball programs will also seek to adopt strategies that give their players their best chance at making it to the professional ranks.

So, while the NBA eschews the passing game, the NCAA will likely trend away from it as well, and we've already seen that trend at Villanova in recent years.

That doesn't mean that all programs will give up on ball-movement. College sports will always feature greater variety in their schemes than the professional ranks. Partially that is because of a lower level of overall talent in college and a far lower level of experience.

While Villanova fans clamor for timely passing and ball-movement to open up shooters and create offense in the half-court set, there seems to be less and less of those things on the court. The Wildcats aren't alone, but the offensive scheme appears more and more to mimic the schemes preferred by NBA coaches. Iso plays to create opportunities for one player or another are the tendency, pick-and-roll (or as Jay Wright often calls his version, 'pick-and-pop') plays will be leaned on as well.

When the pro's do pass, it is usually an alley-oop, or a bounce pass to an open teammate for a shot. For the most part, the ball will do most of its moving while a guard dribbles it down the court, or into the lane.

"There still are some good passers in this league, but we rely on different things now - putting dominating players in certain positions," Phoenix Suns guard Steve Nash told the Chicago Tribune. "I think 20 years ago and before, we played a much more cerebral game. There were more guys involved, more ball movement, more reading and reacting."

Some might blame the AAU circuit for the decline in passing games. There isn't a huge difference between some AAU games and the AND1 Streetball tour, so it is easy to place the blame on youth leagues of that sort.

High School coaches also get to spend some time working with players as well, and college coaches could force players to learn how to pass, but players don't always need to display their passing skills in college to make it to the NBA. Especially with the pro-circuit's declining emphasis on that area of game play.

With many elite college recruits already thinking ahead to their potential professional careers, the tendency for the foreseeable future will likely be to continue to move away from a passing game.