Share All sharing options for: Larry Brown to coach SMU 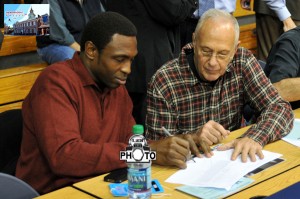 Larry Brown will still be sitting courtside for at least one Villanova basketball game in 2013-14, but it will not be as a spectator and trusted advisor to Jay Wright. Instead, the former NBA and College head coach will resume his head coaching career at future Big East member, Southern Methodist, set to join the conference for the 2013-14 academic year. Speculation about Brown's interest in the position has been known for a while, but SMU has spent much of its time since firing Matt Dougherty pursuing various active big name coaches. When it came time for the school to pursue realistic options, Brown was the biggest name remaining on their list. According to ESPN's Jason King, the deal is done, pending the finalization of Brown's staff.

Brown and SMU are looking to bring in an experienced college coach to be a top assistant and "coach-in-waiting" to take over after the 71-year-old Brown ultimately retires. The assistant would also help Brown navigate a recruiting game that he has been out of since 1988.

Currently the top target is Illinois State coach Tim Jankovich, who is on the fence about whether or not to leave a team that is poised for a very good season in 2012-13. UNC-Wilmington's Buzz Peterson had also been contacted about that job, but ultimately decided to remain in place.

Brown had spent a significant amount of time around the Villanova basketball program in recent years, attending practically every Wildcats home game in the 2012 season. He also often attended practices as Jay Wright's guest and as an advisor, serving a similar role as Gene Keady did at St. John's, but without an official title.

Brown started hanging around the Villanova program when he was fired by the New York Knicks after the 2005-06 season and returned to the Philadelphia suburbs after another NBA gig with the Bobcats fizzled out. Though his last college coaching job ended in 1988, he spent 18 seasons following his stint at Kansas coaching in the NBA. He holds NBA titles, three NCAA Final Four appearances and a NCAA National Championship —he remains the only coach in history to win an NCAA title and an NBA championship 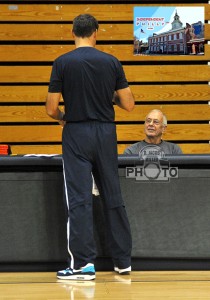 Brown's visits to practice have coincided with some of the best times in program history — the early part of the Scottie Reynolds years ('06-'07 and '07-'08) — as well as some of the worst ('10-'11 and '11-'12). It is hard to draw any conclusions of Brown's impact on the Villanova program from their successes or failures during those times.

When his last NBA job ended, Brown told reporters that he was "bored" without basketball — the reason why he spent so much time around the Main Line program.

Brown is from the Brooklyn, but settled in the Philadelphia area when he took the head coaching position with the 76ers in 1997. His wife and two children have remained in the area since that time. He was rumored to have had interest in the Penn State job when Ed DeChellis left that position for Navy and was reportedly close to accepting the head coaching job at Stanford in 2008.

SMU has raised a significant amount of money from boosters in order to secure a big name coach to take on the project of building SMU into a competitive Big East program. The Mustangs had been targeting Marquette's Buzz Williams, a Texas-native, but Williams issued a statement yesterday affirming his intention to stay with the Milwaukee school. There were also rumors that SMU had been talking to Virginia Tech's Seth Greenberg.

The Mustangs have invested heavily in facilities for the basketball program recently, building a practice facility and renovating their on-campus arena. They will need a coach who can recruit players and lead the team at a level that matches that investment.

The program last appeared in the NCAA tournament in 1993 — a level of basketball futility that is only matched in the Big East by Rutgers, who last received a bid in 1991.