Expansion Update: MWCUSA, will they or won't they?

Share All sharing options for: Expansion Update: MWCUSA, will they or won't they? 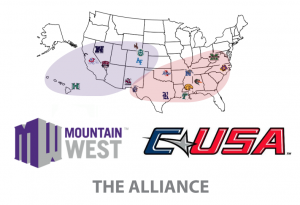 The future of the Mountain West/Conference USA Alliance without a doubt, will have an effect on the structure of college athletics going forward. The two conferences were initially planning to dissolve and form a new conference containing all of their members, but may instead merge or form a different sort of affiliation instead — once details are decided, the new "MWCUSA" will likely add teams, raiding conferences like the Sun Belt and WAC to add members, but perhaps reaching as far as the Atlantic-10's Charlotte and other schools.

Yesterday, CBSsports.com reported that the deal that would turn the two conferences into a single entity was likely off. That report said that it was still likely that the leagues could remain separate and share some resources, including television rights, marketing and scheduling resources.

Another report from the Honolulu Star-Advertiser, coming out a few hours later, conflicted with the earlier CBS report. Citing the chairman of the MWC Board of Directors, the Hawaiian paper said that the merger plan was "on course and proceeding as planned."

A resolution to the matter should come by early June.

The merger will affect all of college athletics, as the jumbo-sized MWCUSA's success or failure could be instructional for the higher-profile leagues as they explore the possibility of expanding further and further. More immediately, the addition of teams to the two leagues in order to reach a total size between 18 and 24 members would probably have a negative effect on the Sun Belt and WAC conferences, who seem most-likely to be raided.

Those raids could force the Sun Belt and WAC to merge into a second geographically-massive mid-major conference, force the WAC to disappear entirely or reclassify to FCS. Depending on how badly each conference is hit by the shifting of realignment, the WAC and Sun Belt could also look to the FCS ranks to reload their membership. For the Sun Belt, the obvious choices to upgrade may be schools from the Southern Conference, the Ohio Valley Conference and CAA (the WAC offers a number of Texas schools that may also be wooed by the Sun Belt). For the WAC, the best targets would be members of the Big Sky conference, Missouri Valley or to a lesser-extent, the Great West.

Both conferences would potentially be able to look at the Southland Conference membership.

The Big East remains on the lookout for one or perhaps two more western partners, but conference shifting at the highest levels of NCAA sports has otherwise seemed to slow down recently. Nonetheless, shifting isn't over, and it now appears likely that less powerful conferences will begin to participate in the jockeying for position.

The CAA has already lost football and olympic sports member, Georgia State, to the Sun Belt. Will that be the last exit from the FCS's best conference, or are more departures yet to come?

We reported that there may be some big plans for the CAA football conference that could change the fortunes of a number of schools. Merging conferences and the disappearance of others, might create the opening that the CAA needed for that to happen.

First, however, the MWCUSA needs to come to fruition.