Share All sharing options for: Ochefu shining in Conshy

Where Ryan Arcidiacono's Bucks County team couldn't get past Team Philly at the Donofrio Classic, the stacked I-3 roster, featuring Villanova's other 2012 signee, Daniel Ochefu, was able to hold their own. While Amile Jefferson won the MVP award for I-3, Ochefu managed to post 21 points, 10 rebounds and 5 blocks in the contest to help his team to a 91-85 win.

It was the 6'9" center's first experience playing at the Donofrio Classic, held annually at Fellowship Hall in Conshohocken, Pennsylvania. The regional tournament may not have been an obvious outlet for the player who was born in Maryland and raised in Lagos, Nigeria (the "New York of Africa") from age 11 before moving back to the U.S. in time to start high school at Westtown in Pennsylvania.

"I got asked by a couple teams to play here last year," he told the Philadelphia Daily News. "It just didn't happen, and I really can't remember a reason.

According to reader, 'Jimdribble' [multiple comments edited for flow]: 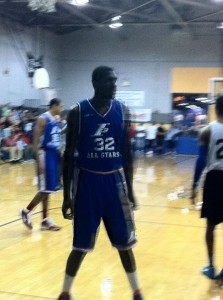 It was one of the best games I have seen in a long time, the talent level was very high and it was a well played game. I-3 won behind Ochefu and [Amile] Jefferson. They played very well and even played well together with a few nice hi low's between them. The game began with Ochefu tapping the ball to Amile and Amile passing the ball to Daniel for a bucket.

I have to say that Jefferson and Ochefu compliment each other out there. Amile's dad said that it was funny "rooting for Daniel" as they had played against each other for three years.

I want to express to people how agile Ochefu is as his footwork is good and his hands are good. Ochefu has such good hands and had some key rebounds and finished with about 18 points [Editor's note: it was 21]. His jump hook gets better and better.

I have been very impressed with [Team Philly's] Rysheed Jordan. He was incredible with some great outside shooting and some incredible moves. Out of all the point guards I saw- Chambers, Newton, Maurice Watson and others, Jordan was by far the best. I really feel like he is better than the two possible transfers and there is SO much point guard talent in Philly right now.

The other players on Team Philly that were good were Brendon Taylor and Brandon Austin. Both have committed to Penn State. It is interesting as [PSU head coach Pat] Chambers is making strong inroads in the Philly players.

Jefferson is the first person to ever be on a team that won the Donfrio four times.

The I-3 team was also supposed to feature former Villanova commit, Savon Goodman, but the small forward from Constitution High (formerly from ANC) did not show up on Tuesday night. The team did feature sophomore point guard Ja'Quan Newton from Neumann-Goretti, also a Villanova target.

Amile Jefferson, who has yet to announce his college decision between Duke, NC State, Kentucky and Villanova, scored 24 points and added eight boards and six blocks for the team.

Rysheed Jordan of Team Philly, who has also had some interest from Villanova, shared the tournament MVP award with Jefferson. Jordan scored 34 points, with eight rebounds and 10 assists. Ochefu was named to the all-tournament team.

"I think I have a real high 'ball IQ. And I'm willing to work, Ochefu said. "Whatever coach [Jay] Wright wants from me, I'm going to provide it. Whether that means grabbing rebounds, running the floor and blocking shots one night or using good postup moves the next.

"Really, I guess I'll have to do all of that some nights. I'm still improving my footwork. That's going to be important."