Lax: Big East title to be decided on Saturday

Share All sharing options for: Lax: Big East title to be decided on Saturday 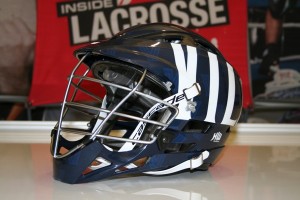 Notre Dame lacrosse has won 8-straight games to go to 9-1 on the season, but they are tied with Villanova atop the Big East standings heading into a crucial Saturday evening showdown at Villanova Stadium. Both teams are 4-0 in the conference standings and the winner of the game will likely take the regular-season title and the top seed for the Big East tournament (and should avoid a dangerous match-up with Syracuse). It will be the 16th overall meeting between the two schools with the all-time series favoring the Fighting Irish, 10-5.

The Irish are undefeated on the road and 4-1 at home, with their one loss coming at the hands of Penn State. They will end their regular season with a home game against Syracuse, who are third in the conference and have their only loss thus-far to Villanova. The Fighting Irish are coming off a 9-7 victory versus Georgetown last weekend and have posted wins over Duke, Drexel, Hofstra, Denver, Ohio State, Rutgers, St. John's, Providence and Georgetown.

The 'Cats are currently ranked 11th in the nation while Notre Dame enters the match ranked 5th.

The Irish average 8.30 goals per game on offense, led by Jim Marlatt with 20 points via 14 goals and six assists. Sean Rogers follows closely behind with 13 goals and 4 assists, while Westy Hopkins has contributed 15 points through 9 goals and 6 assists this season.

Defensive is where Notre Dame shines, however, surrendering just 5.47 goals per game. John Kemp is one of the best goaltenders in the nation, ranking first in the NCAA with a 5.54 goals against average and a .663 save percentage. Close defensemen Matt Miller, Stephen O'Hara and Kevin Randall have helped achieve those numbers, posting 48 ground balls and 28 caused turnovers on the year. Midfielders Bobby Smith and Tyler Anderson have added 32 ground balls and 13 caused turnovers.

This season, Villanova has been more generous than the Irish on defense, allowing opponents an average of 9.93 goals per game, and senior goalkeeper Dan Gutierrez has a save percentage of .491 on the season. Villanova can credit its wins to a potent offense that has averaged 11 goals per game, through 12 games, including a .638 shot on goal percentage. The 'Cats offense is led by a triumvirate of Kevin Cunningham, with 35 points via 17 goals and 18 assists, Will Casertano with 32 points, and Jack Rice with 27.

Villanova doesn't have a set offensive playbook, instead, they use passing and ball movement to break down defenses — which according to ESPN's Paul Carcaterra, is unusual in today's game:

Villanova is a really interesting team. I feel like they run a non-traditional offense because in this day and age, midfielders are attacking short sticks and breaking down the defense from up top. Villanova breaks down a defense with an extraordinary amount of off-ball movement, and that makes it very difficult to defend. I watched the entire Villanova-Syracuse game [which the Wildcats won, 11-10, March 25] and I was very impressed with the motion offense of the Wildcats. When you watch them play, they almost resemble a half-court basketball offense where everyone’s moving around and no one is standing still. And the way they set up their dodges allows the ball carrier more space because of all of that movement. And I think they’re a really difficult team to defend.

Thomas Croonquist, a sophomore face-off specialist has posted a .620 win percentage from the X, taking 116-of-187 attempts on the season.

The best defense for the Wildcats has been a strong offense this season. When the 'Cats start strong and keep the attack up, opponents have a hard time keeping up on the scoreboard. When they struggle early, they haven't had much success. Notre Dame will have a tough time preparing for the Wildcat's attack and they will have to shoot a good percentage in their own right to keep up — something that they haven't done consistently this season.

A win for Villanova likely means that the 'Cats will enter the Big East tournament with the number-1 seed and home-field advantage. It would also likely push them off of the NCAA tournament bubble, where InsideLacrosse.com currently has them listed with a good chance of making the field at 11th in the RPI. Currently, they would be projected to go in as an unseeded team in a third-straight NCAA appearance, but could land a home game by winning a few more games.

Saturday's tilt will also be televised on ESPNU and will stream live online at ESPN3.com at 5:30 pm.