Share All sharing options for: Men's Crew needs love too 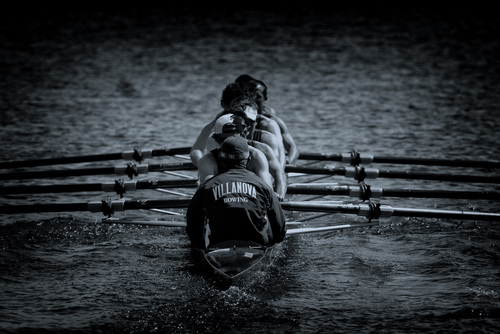 When we posted a video about the women's rowing team's upcoming regattas, we neglected to mention that Villanova also has a men's team, preparing for the same races. An email from Matthew Valazza, a sophomore on that team has since set us straight. The men's team currently has club status, but they have nonetheless had some success on the water.

Here is what Mr. Valazza had to say:

My name's Matthew Valazza and I am a sophomore on the men's rowing team. I didn't want to change the topic on the girls post by linking to anything, but I thought I'd let you know the status of the Men's team.

Although Club, we race in the same races, against the same teams, and out of the same boathouse that the girls do. We'll be at Kerr Cup, Bergen Cup, and Dad Vail in a few weeks. We had a great showing at Dad Vail last year. The Freshmen 4 won a silver medal, and the Varsity 8 made it to semi-finals for the first time in about 10 years.

This season we have a very fast Varsity 8, and are looking to make petite finals at Dad Vail. With strong new athletes, the freshmen 4 looks to medal in grand finals again.

To the Barney Rubble guy who commented on the thread, there are plans to build a new boathouse. Supposedly, it should be done in my senior spring (although I'm not holding my breath). As for Boathouse row, It is prohibitive for us to have a boathouse there, because it would take too long to get to and from practice in the morning.

If he really wants to compete with Saint Joe's where it matters (on the water) he could help the men's team in our process of raising funds for a new boat. We were only a couple tenths off of St. Joe's at Knecht Cup, SJ:6:07.45 VU: 6:07.72, while rowing an old girls team hand-me-down.