Ochefu Shines; Goodman AWOL .... Ted Silary of the Philly Daily News wrote a feature on Villanova’s 6-10, 240-pound signee, Daniel Ochefu. Ochefu’s "I-3 All-Stars won the Donofrio Classic championship on Tuesday night with a 91-85 victory over Team Philly. Ochefu contributed 21 points (9-for-10 from the floor), 10 rebounds and five blocks. Ochefu’s teammate, Savon Goodman, who was expected right up until tipoff, never put his face in the place. Afterwards, Ochefu said, 'I think I have a real high 'ball IQ. And I'm willing to work. Whatever coach [Jay] Wright wants from me, I'm going to provide it. Whether that means grabbing rebounds, running the floor and blocking shots one night or using good postup moves the next. I'm still improving my footwork. That's going to be important.'" [Editor’s Note: Ochefu made the All-Tourney squad. Villanova recruiting long-shot, Amile Jefferson, took Co-MVP honors.]

LAX Cats Equal to the Challenge ... Edward Lee of the Baltimore Sun interviewed former Syracuse All-American midfielder and ESPN Analyst Paul Carcaterra about Villanova's chances to upset Notre Dame on Saturday. Said Mr. Carcaterra, "Villanova is a really interesting team. [They] break down a defense with an extraordinary amount of off-ball movement, and that makes it very difficult to defend. I [am] very impressed with the motion offense of the Wildcats. They almost resemble a half-court basketball offense where everyone’s moving around and no one is standing still. I think they’re a really difficult team to defend. Now if any team mentally is going to be able to prepare for that type of offense, it’s Notre Dame. They’ve played incredible defense over the last five years, and they play the best defense in the country. But I think Villanova is a team that can upset Notre Dame if Notre Dame doesn’t shoot well. "

Twins Are Villanova-Bound; No, Not Those Twins, the Other Ones ... The Washington Post reports that "Villanova-bound twins Caroline Coyer and Katherine Coyer, who paced Oakton to the Virginia AAA title and a 31-0 season, will lead the Virginia public school all-star team today in the Capital Classic games in Washington." The Washington Post says that "Caroline Coyer is the flashier player, a 5-foot-9 slashing point guard with a quick step. Katherine is a punishing 5-10 defender with a relentless motor."

Oh Yeah, About Those Other Twins ... Daniel Martin of NBC Sports reports that Villanova’s 2013 targets, Andrew and Aaron Harrison, are in Pittsburgh today for "Day 2 of Hoop Group’s Pittsburgh Jam Fest. "Our lists are still open," Andrew told NBCSports.com [about their recruiting status]. "We have a top four, but that doesn’t mean another school can’t come up." The duo lists Kentucky, Maryland, Baylor, and Villanova as the leading programs at this point. Harrison also made one thing clear: they will choose a school as a duo and are set on playing together in college. "We’re definitely a package deal," said Aaron. "One-hundred percent."

Are We There Yet? ACC Basketball Recruiting Analyst, Clint Jackson, tweeted on Thursday, "No Amile Jefferson announcement this week. Maybe next week." So what is he waiting for? Amy Fadool at Comcast Sports says, "Well, it might not be what … so much as who. People close to Jefferson say the Friends Central senior is waiting to see how some of the rosters shake out of the school’s he’s interested in, specifically North Carolina State and Duke." ESPN reportsthat "Jefferson was named to the 2011-12 ESPNHS All-American fourth team after leading Friends Central to its fourth straight state Independent Schools' crown. Last summer, he led the NBPA Top 100 Camp in scoring, was Pennsylvania and a McDonald's All-American. Duke, NC State and Villanova are on his short list." Bleacher Report’s Josh Schoch has this to say about the chances of Villanova receiving a commitment from Jefferson: "Villanova used to be a great school for basketball, but the school has dropped off in recent years, and is now a mediocre team in a conference that is going to be torn apart by conference realignment. While staying close to home can be good for some recruits, I don't see it being a huge factor in Jefferson's decision. This kid is going to be a star, and like most star players, I see him making sure that he goes to the best school no matter how far away it is. Also, the fact that his other three schools are all in the South (including two in North Carolina) tells me that that is where he wants to be.

Please Stop At the Bursar’s Office to Collect Your Final Paychecks … Associated Press reports that "Kentucky's starting lineup of three freshmen and two sophomores did most everything together. [On Tuesday night], freshmen Anthony Davis, Michael Kidd-Gilchrist and Marquis Teague, and sophomores Terrence Jones and Doron Lamb declared for the draft and will go their separate ways in the NBA." ESPN’s Dana O’Neill writes, "Stop complaining that John Calipari is a used car salesman and his players are mercenaries. John Calipari is a businessman running a multimillion-dollar business, not a coach with a whistle in charge of a CYO team. His players are junior entrepreneurs, interning for a year before cashing in on the big gig, not plucky kids hoping to get a chance. Am I a fan? Absolutely not. I prefer my college athletes have more staying power than a fraternity party hook up. But I’m also a realist and I realize that conventions don’t last. The construct of the rules dictate how the game is played, and one overriding rule still applies: He who has the best players wins. Kentucky will continue to win because Calipari will continue to get the best players. The NBA draft is now Kentucky’s biggest recruiting tool, where future championships are born".

Nova Basketball Finally Makes Someone’s Top Twelve List … Bleacher Report’s Thad Novak named his twelve most head-scratching college basketball early entry decisions of 2012, with Villanova players dominating the list. Coming in at #6 is Maalik Wayns with the commentary, "Wayns could’ve emerged as a bonafide star in 2011-12 and made his decision to enter the draft a foregone conclusion. Of course, very few things broke in Villanova’s favor last season, and Wayns instead finds himself a forgettable prospect who will be lucky to make the bottom of the second round. Wayns did increase his scoring [to] 17.6 points a game, but he’s a point guard by trade, and his assist totals [were an unspectacular at] 4.6 a night. Worse yet, he turned the ball over 3.0 times a game—hardly the kind of performance that will have NBA teams clamoring for his services. Just missing the top spot and coming in at #2 on the list was Dominic Cheek. Mr. Novak called Dom "the second-best guard on a bad college team. What about that status sounds like an NBA player in the making? He has the length to play the 2 in the NBA, but why anybody would bother giving him a chance to do so is a mystery." Len Robinson answers those who doubt Cheek's decision in today’s New York Post. Writes Mr. Robinson, "[Cheek’s] decision was based mostly on financial considerations. He’s a perfect prospect to play in the lucrative leagues from France to Israel to Russia. At 6-foot-6, 190 pounds he can do a little bit of everything, and he will do it right. A team owner won’t have to worry about some ugly American getting into a bar fight in the red-light district. He will work hard. Cheek will be the American making the sacrifice for his family[and] will send home most of his paycheck."

Yes, Attending Class Is Optional ... Keith Pompey of the Philadelphia Inquirer reports that "Constitution High coach Rob Moore will meet with Temple to discuss the recruitment of forward Savon Goodman, according to multiple sources. The Temple [coaches] want to know what type of person the 6-foot-6 senior is. According to another source, the Owls are expected to offer Goodman a scholarship. As of Monday, there was thought that Goodman would attend prep school next year. He wanted to spend the year working on his outside shooting. Goodman backed out of an oral commitment to play at Villanova in August."

But They Got Straight-As in Gym ... ESPN reports that "the NCAA defended its standard for academic performance Thursday that led to Connecticut's men's basketball team being banned from next year's. Said Bob Williams, spokeman for the NCAA, ‘Every other team at the University of Connecticut met the (APR) standard. Every other team in the entire Northeast did. So obviously the standard was well known and others met the standard. The real issue is the academic performance of the UConn men's basketball team.’ Connecticut officials argue the penalty was applied retroactively and hurts current students, who had nothing to do with the low scores." NBC Sports reported today that rising junior, Rosco Smith, is the latest UConn player to announce he will not be returning to Connecticut. Smith is eligible to play this year at another school because UConn is not eligible to play in the NCAA tournament.

Syracuse to Penn State: We Feel Your Pain ... ESPN reports that "Zach Tomaselli, just five days after saying he had been lying the past few months about his claims that former Syracuse assistant coach Bernie Fine sexually abused him as a child, said Wednesday he was indeed abused by Fine. Tomaselli released a statement on Wednesday in direct contradiction to his previous comments to Syracuse local media last Friday. Tomaselli said he'd had a "complete psychiatric breakdown" when he recanted. Bobby Davis, a ball boy for Syracuse teams in the 1980s, and his stepbrother Mike Lang also have accused Fine of molesting."

About As Sad As It Gets .... Mike Anthony of the Hartford Courant reports that "legendary Tennessee women’s basketball coach Pat Summitt, who was diagnosed about a year ago with early onset dimentia, stepped down Wednesday as Tennessee coach and made it official at a Thursday afternoon news conference."

Dante's Chance to Shine ... BleacherReport’s Tom Firme reports that Memphis Grizzlies' Marc Gasol's [leg] injury may cause him to sit out the remainder of the regular season. "Dante Cunningham, who's the likely replacement for Gasol, will be just fine in his place. Starting in place of Gasol the last time they played Minnesota, Cunningham had 13 points and 14 rebounds in 40 minutes. Cunningham is a solid defender who's athletic and can grab rebounds. He won't make noise on offense, but the Grizzlies have other players who can fill in for Gasol's scoring." 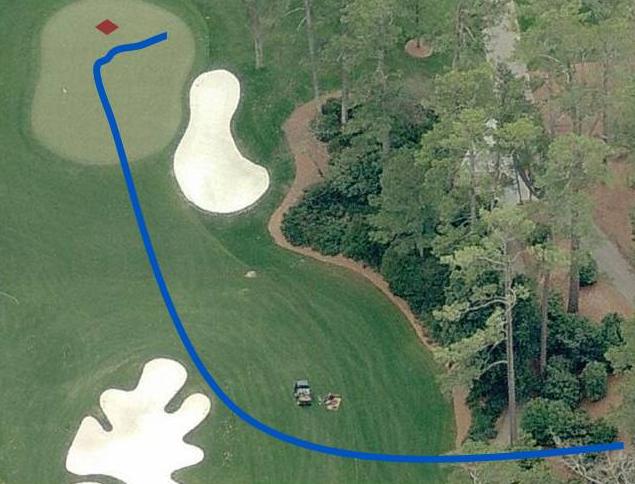 VUHoops Blogger At Center Of Masters Controversy … Who will ever forget the miraculous shot that Bubba Watson hit from the pine straw on the second playoff hole at Augusta National to win the 76th Masters on Easter Sunday? Jonathan Heeter of McClatchy Newspapers wrote, Watson’s [shot would need to go through] gap in the trees, staying below the tree limbs, [then hook severely and carry 60 yards] over the bunkers guarding the front and right side of the green." Anyone not in a coma knows that the shot landed ten feet to the right of the pin, and Bubba putted out for the win. It turns out, however, it may not have been Bubba who made that miraculous shot. Pete of Let'sGoNova.com reports that VUHoops’ blogger, Brian Ewart, allegedly stepped out from the Master’s crowd and took the shot for Bubba. Just before Brian swung, Pete quotes several witnesses who say Bubba told him, "Just hit your normal shot and I will be donning my green jacket before you can say Jack Nicklaus." Mr. Ewart has dismissed the allegations as a desperate and sensational attempt by Pete to get back into the blogging game. [Editor's Note: Brian will need to cut back on his VUH blogging to four posts a day to concentrate on his defense against several civil suits brought by the PGA, the most serious of which is impersonating a golfer.]