Share All sharing options for: R-R-R-Rollie and the Nets... 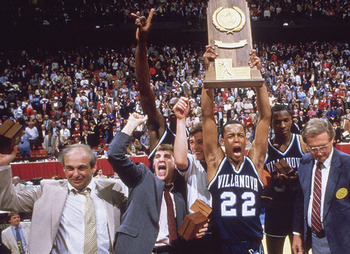 Kentucky fans won't believe it, but John Calipari will be fielding phone calls from NBA owners soon, if he isn't already. After winning a national title, he is one of the most in-demand coaching names in the country, and there is nowhere better to go in the college game. Title-winning coaches have long found themselves on the NBA-radar, and that trend goes all the way back to 1985.

Often glossed over in recounting the events of Rollie Massimino's career is the vignette of his flirtation with the New Jersey Nets. Similar to Florida coach Billy Donovan's flirtation with the Orlando Magic 22 years later, Massimino had all-but moved into an office at the Brendan Byrne Arena in East Rutherford, New Jersey, when he had a change of heart about the situation.

In one of NJ.com's many New Jersey Nets eulogies (the Nets move to Brooklyn next year), they recount the tale:

Rollie Massimino, a former New Jersey high school coach, led Villanova to an upset of Georgetown in the 1985 NCAA Finals — a coaching victory that was truly a masterpiece of the art, and one that inspired the Nets to throw a 10-year, $21-million offer at the sport’s latest genius. He accepted, and even helped the Nets prepare for the 1985 draft.

Then, early on June 20, 1985, Massimino called owner Bernie Mann and told him to cancel his introductory news conference that afternoon, because he was staying at Villanova.

The Nets had offered him a guaranteed contract to coach for the first four years of the deal and a guarantee that he would have a position in their front office thereafter, even if he were not retained as coach. It was a massive financial windfall for the time.

It had been widely assumed that the Villanova coach would be moving to the NBA ranks that summer. It was so sure in peoples' minds that friends in college and pro basketball alike teased him about it regularly that spring.

The 'Nova coach was being roasted at a Philadelphia fund-raiser to benefit leukemia research. Friends like 76ers general manager Pat Williams, former Sixer coach Billy Cunningham and North Carolina State coach Jim Valvano basted Rollie in a predictable marinade of waistline and wardrobe jokes. But they also made presumptuous allusions to his move to the NBA, which, everyone assumed, was certain. "Have you ever been to Lovetron?" Cunningham teased, referring to the imaginary extraterrestrial home of the Nets' eccentric center Darryl Dawkins.

Throughout the evening, Massimino protested that he hadn't yet decided to take the job, even though he had already initialed a memorandum of understanding with Nets president Bernie Mann. But the feeling was clear. "The way people were talking," said Harold Jensen, a Villanova guard, "it seemed like a farewell party."

Coach Massimino wasn't glued to Villanova, as his 1990s departure for UNLV proved, but in 1985 there were too many good feelings and good people around the program. The money was tempting, but his good friend and V Foundation founder, Jim Valvano, helped him to change his mind.

After a late-night discussion with Valvano and former Philadelphia 76ers coach Billy Cunningham, Massimino made his decision to cancel his introductory press conference in New Jersey and stay put. He called a 7:30 am team meeting to let his players, who had marched to his house days earlier to beg him to stay, hear the news.

The Nets, meanwhile, had planned to have a press conference introducing Massimino as their next head coach at 1:30 that afternoon. It would have to be cancelled. Rollie had never told Villanova's athletic director, Ted Aceto, what his plans were until that day, but he shocked many when he turned down a deal that would have paid him $375,000 per year.

Nobody was more affected by the process than former trainer and later fieldhouse namesake, Jake Nevin.

At the roast, Nevin had pulled Massimino aside and whispered, "I'd never have let you win the championship if I'd known you were gonna leave us."

Nevin, spotted in the hallway at about 7:25, was the first to hear of Massimino's decision. Nevin, who hadn't caught a wink all night himself, broke down. Then Massimino shoehorned Nevin, along with 12 players, four assistants and three managers, into his office and said, "Fellas, I'm staying."

Rollie then jokingly asked his players to paint his house.

His attorney would later tell the New York Times that the deal with the Nets broke down over contract specifics, but Massimino denied that claim later.

He had been coaching at Nova without a contract for three years, but the University was poised to pay big money under a new deal to keep him in place. The Board of Trustees was stacked with allies for the often-disheveled coach and construction on the Pavilion was already scheduled, giving Massimino's program brand new facilities.

As Dick "Hoops" Weiss, then a writer for the Philadelphia Daily News put it, "He can be emperor for life on the Main Line."

The emperor ended his reign in 1992, after a 15-loss losing season and first round NIT exit, accepting a scandalous contract to become Jerry Tarkanian's successor at UNLV. He took a promising young assistant coach from Villanova, by the name of Jerold Wright (hired in 1987), with him out west.

After two seasons in Sin City without an NCAA tournament bid, Massimino moved on to Cleveland State, where he had a 7-year run. He would never again see the same success he had at Villanova.