Share All sharing options for: Visits Cancelled? Ennis to announce 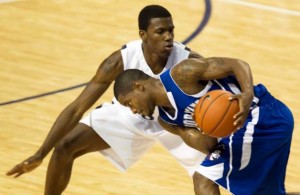 After visiting Villanova and Cincinnati the past two weekends, it appears that Rice transfer Dylan Ennis is set to decide. He was also considering Virginia, Virginia Tech and Boston College but according to the founder of CIA Bounce, Ennis' AAU team, he will make a decision tomorrow instead of visiting his other three schools. Ennis will pick between the two schools that he has visited, Villanova or Cincinnati.

Ennis later confirmed the report on his Twitter account. He plans to make the announcement around noon, but the time is not set in stone.

We previously noted a report that Ennis had arranged a visit to Virginia Tech for May 5th, but he apparently felt good enough about the two Big East choices to move his decision up. The Hokies fired head coach Seth Greenberg this afternoon, which likely contributed to their elimination.