Dylan Ennis will be a 'Cat

Share All sharing options for: Dylan Ennis will be a 'Cat 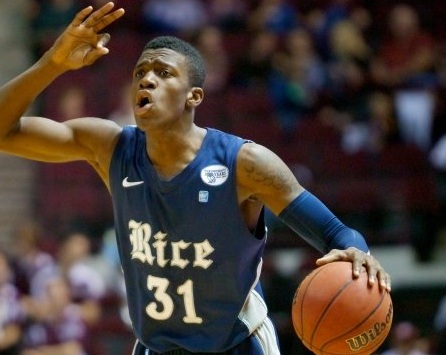 Dylan Ennis notified associate head coach Billy Lange this morning that he will transfer to Villanova from Rice University, where he started as a point guard this season. He will have three years of eligibility left to play after transferring. He has said that he'd love to get a waiver to allow him to play immediately, it is unlikely that he will qualify for an exception to the NCAA rules to allow him to do so.

"Becoming a part of the Villanova basketball program is a blessing," he said.

"Being at Rice University allowed me to grow as a player and person, but getting closer to home played a big part in my decision. And to play under a great staff and around great players made that decision to pick Villanova that much easier.

"The process was fun, but now its time to move on and get back to working hard."

According to Ennis, he had received scholarship offers from Villanova, Virginia, Virginia Tech, Cincinnati, Oregon, Boston College, and Wake Forest, "and a few others" after receiving his release from Rice. He wanted to play closer to his family in Toronto, as well as his brothers, who are both in schools in the northeast corridor.

His older brother plays basketball for Division II University of D.C. in Washington, while his younger brother Tyler is a highly sought-after prospect in the 2013 class, currently playing at St. Benedict's Prep in Newark, New Jersey.

Ennis visited Villanova the weekend of April 14th and took a visit to Cincinnati this past weekend. He apparently had a visit to Virginia Tech tentatively scheduled for early May, but the Hokies fired head coach Seth Greenberg on Monday, which likely ruled the ACC school out of the mix. He announced yesterday on Twitter that he would make his decision official today.

Coming out of prep school at Lake Forest Academy (Illinois), ESPN ranked him among the top-30 point guards in his high school class. He was unranked by Rivals.com, but his handle and passing were rated "outstanding" by that site, while his shooting was rated "good."

As a freshman at Rice, the 6-2 guard averaged 8.5 points, 4.1 assists, 4.3 rebounds and 1.1 steal per game in 26.5 minutes. He was named Conference USA Freshman of the Week twice, and finished the season included on the conference’s All-Freshman team. He holds the record for assists by a freshman in a season with 144, shattering the previous record of 114.

Ennis also sports a good wingspan and demonstrates potential to become an excellent defensive player in the Big East.

Villanova is also recruiting his brother Tyler, but it is unknown if this decision will have an impact on the younger Ennis' recruitment.

Update 6:00pm - The Philadelphia Daily News has noted that Dylan Ennis and Tony Chennault have spoken and that Chennault may still decide to attend Villanova next season. As for whether Tyler Ennis could still be in the picture for 'Nova, their' father told the paper that, "If you have one, you don't need the other." Dylan said that his brother's decision will come down to whether or not he wants to play with or against his brother.

Either way, Dylan Ennis will likely be a productive player for the Wildcats and with some strong guards already aboard, point guard won't be a desperate need in 2013.