Visit set for the Harrison Twins

Share All sharing options for: Visit set for the Harrison Twins 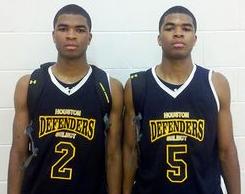 According to the Philadelphia Inquirer, Andrew and Aaron Harrison, will visit Villanova this week. The blue chip guards are the top ranked shooting guard and point guard in the 2013 class. Jay Wright spent a good portion of the last weekend watching the talented Texan brothers play with their Houston Defenders AAU squad and apparently trying to get them on campus.

"Andrew is your prototypical point guard, it’s just that he is 6’5’’," Fort Bend Travis head coach Craig Brownson told FiveStarBasketball.com. "He understands how to get his teammates involved, he’s always trying to make the right decision on the court.

"Aaron is more of a scorer, he can shoot from deep, get to the basket, get fouled, hit free throws."

The Harrisons have family in the Baltimore area and Maryland has been seen as a strong contender to land them, along with Villanova, Kentucky and Baylor. Those four schools remain their top choices, but Kansas and Arizona have also joined the hunt recently.

The twins don't seem to be a strong lean for any of the schools on their list and had nice things to say about each program recruiting them. That includes Villanova, which still has the "Guard U" reputation among the class of 2013 recruits.

"I like the way they use their guards," Andrew Harrison said of Villanova.

Ultimately, expect the Harrison twins to take more visits and put off a commitment until the end of the summer or later.

"We just want to see all of our opportunities and make sure we make the right choice," Aaron said.