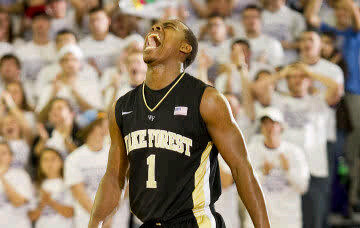 According to Wake Forest transfer point guard Tony Chennault, he will make a decision on where to enroll and play basketball by next week. He is seeking a waiver from the NCAA that would allow him to play at a new school next season without sitting out, and it is believed that he has a compelling case for such a waiver.

"His mom’s not the most well person in the world," his high-school coach, Carl Arrigale told the Winston-Salem Journal. "And sometimes when he comes home, I think it hits him."

Under the "Tyler Smith Rule," the NCAA routinely grants waivers for student-athletes with similar situations.

Chennault started all 31 games this season for the Demon Deacons, averaging 9 points and 2.8 assists. In high school, he was the Gatorade Player of the Year for Pennsylvania in 2010 and was the 25th-rated point guard in his class and rated 3-stars by ESPN.

He would have two years of eligibility remaining after he transfers. So far, Villanova is the only school he has actually visited, but he has also been considering a number of other Philadelphia-area schools, including Drexel, St. Joseph's and Delaware. If he chooses Villanova, he will join Ty Johnson, Ryan Arcidiacono and Rice transfer Dylan Ennis as point guards in the Villanova backcourt.

Villanova's Jay Wright has expressed a desire to play with multiple ball-handlers on the court going forward.