Share All sharing options for: The Favre Effect: Amile takes his time 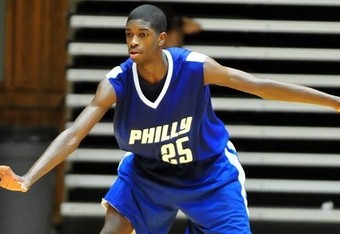 Will he or won't he? It is the kind of drama that ESPN's SportsCenter obsessed over during the final few seasons of Brett Favre's career. Favre waffled over whether or not he wanted to retire from football, but Amile Jefferson has bounced back and forth about whether he was ready to commit to a college program — any college program. He has expanded his list of schools, shortened his list, and expanded it again.

For a while, it seemed like Jefferson might announce a commitment this week — with a Friday press conference being talked about. That won't happen.

"It’s been tough. We’re trying to set a date now. Hopefully by next week, I can finally make a decision…I need that comfort level, when I just know."

Jefferson will decide between reigning national-champion Kentucky, Duke, Ohio State, North Carolina State and Villanova. Duke and NC State seem like his leaders early on, but Kentucky can certainly offer a strong pitch for the Philadelphia-bred forward.

Don't expect Villanova to be his choice, but don't expect a choice anytime soon either.