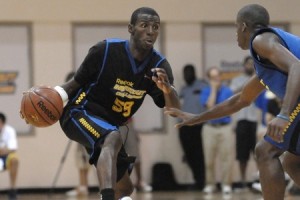 On Saturday Morning, Jay Wright flew down to Hampton, Virginia to watch a number of prospects in the 2013 class, playing the Nike EYBL event at the Boo Williams complex. Before boarding that flight, however, Wright made a Friday night appearance at The Hoop Group's Philadelphia JamFest (held in King of Prussia). That event, sponsored by Under Armour, played host to a number of teams from Philadelphia, New Jersey and the "DMV" region surrounding the Capital as well as teams from further afield, like Kansas City and Utah. On those teams were a number of players who will be mulling over offers from Villanova in the coming months.

When Jay Wright walked into the gym on Friday night, he had a clear objective in place: to get some court-side face-time during the for the Philly Pride game and to make sure that Rysheed Jordan, now a highly-sought point guard prospect out of Philadelphia, was able to see him there. Wright saw Jordan’s Philly Pride team lose a one-point battle to JB Hoops, but the result didn't matter as much as the recruits.

Jordan is reportedly very interested in attending Maryland, but family influences are encouraging him to stay home in Philadelphia. If he does stay home, Villanova will have to battle with Temple for his services. The Big East newcomers, represented in Philadelphia by head coach Fran Dunphy, also checked in on Jordan on Saturday morning in a consolation game at Upper Merion High School. 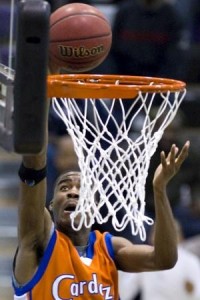 Dunphy also eagerly-watched Savon Goodman’s New Rens squad later on Saturday morning in King of Prussia as they took on Team POY. Goodman wasn’t playing for Rens in the match, since he sprained his knee prior to the weekend, but Temple is on the trail of a few of Goodman’s teammates. 2013 prospect Terrance Samuels reportedly has an offer from the Owls and Dunphy has joined a laundry list of suitors for 6-9 forward Jermaine Lawrence.

Villanova is among that long list of offers, but the Wildcats did not have a representative in the gym to see Lawrence play this weekend — that is, unless you count JayVaughn Pinkston, who stopped by on Saturday night. His other offers include, Cincy, Florida, Georgetown, Kansas State, Louisville, Marquette, Pitt, USF and Syracuse.

Lawrence is a 6'10 forward who has drawn comparisons to Kevin Durant. He is tall and skinny, but also a tremendous athlete who has demonstrated an ability to connect on his outside shot. In fact, he made six triples in one game at the weekend's Hoop Group event. He also works hard on defense and has the ability to become an excellent shot-blocker.

For a player that some consider the best in New York City in his 2013 class, the New York media hasn't really churned the hype machine on him yet. Even if the papers haven't given Lawrence much attention, however, college coaches have clearly taken notice, and his recruitment has taken off. 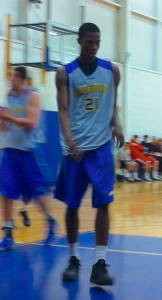 Tyler Roberson was also playing in Philadelphia this weekend with the NJ Roadrunners club. The long and athletic, 2013 forward was being checked out by a number of high-major programs in King of Prussia, including Rutgers, Pittsburgh and Temple as well as a personal appearance from Kansas head coach Bill Self on the sidelines.

Even with all of the interest he has received, Roberson’s recruitment is still wide-open.

Roberson said that he was looking for, "a school where I feel comfortable and with a good coaching staff," and he is particularly interested in schools that use an, "up-tempo style of play where I can get up and down the court."

Syracuse is rumored to be near the top of the list, but Villanova, despite not having a coach to see him on Saturday, has shown a lot of interest in the four-star small forward

"They’ve been showing a lot of interest, they’ve been to a lot of my games during the season."

On Saturday at the EYBL event in Virginia, Wright was joined by top assistant Billy Lange. Wright quickly got to work, checking out Allerik Freeman a top 2013 shooting guard prospect who could bring the 'Cats a nice shooting touch from the perimeter and is putting in the effort to develop into a true combo guard who can handle the ball as well as score. Freeman showed off an ability to make space off the dribble and score with a nice mid-range jumper this weekend

If you thought that Dylan Ennis' commitment would potentially back the Wildcats off of his younger brother, Tyler Ennis' recruitment, you were wrong. Billy Lange spent part of his time at the Boo Williams complex watching the younger Ennis brother and his CIA Bounce team. The Canadian AAU program has produced some of the best talents from north of the border in recent years, and it is worth noting that the team was founded by the Ennis brothers' dad, Tony McIntyre.

Even if that CIA connection doesn't land the other Ennis brother, it might help with some of the other talented players from Canada. Villanova is also on the trail for the CIA Bounce shooting guard, Xavier Rathan-Mayes, who is rated 4-stars. The 2013 prospect is out there looking to prove himself as a scoring threat this summer, and so far it is working as he has accumulated at least 26 scholarship offers already.

Mayes is a deep-threat shooter who can create his own shot off the dribble. He will need to continue to develop his body however, and lacks the explosiveness of a penetrating guard.

Other Notes from the weekend: