Share All sharing options for: The New Head Hokie 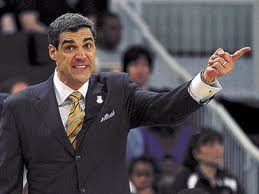 Seth Greenberg spent 9 years at the helm of the Virginia Tech Hokies basketball team, but that tenure came to an abrupt halt a week ago when the head Hokie was fired. The Tech athletics department moved so suddenly to relieve the coach who only took the wayward program to the NCAA tournament once. The Hokies claim that they want to move quickly to replace him, and their candidate list reportedly included Jay Wright.

The Villanova head coach has admittedly had discussions with the Virginia Tech athletic director, Jim Weaver.

Wright and Weaver are old friends who go back to the arrival of Wright with his mentor Rollie Massimino on the campus of UNLV in the early-1990s. At that time, Weaver was the athletic director at the Nevada school, and he has been at Virginia Tech since 1997.

According to Wright, he had conversations with the Hokies AD about various candidates they were considering for their basketball job. Despite rumors to the contrary that spread like wildfire across the internet on Saturday, Wright is not one of those candidates.

Villanova is paying Wright as well as anyone in the college ranks and his 2009 contract extension has given him a degree of job security on the Main Line. If Jay Wright walks away from the Wildcats, it would likely require a large buyout as well.

With the rebuilding project ahead in the next few years at Villanova, some wouldn't blame Wright for bolting for greener pastures. The pastures are hardly green at Virginia Tech, a school that hasn't won a conference title since 1996 and has made just 4 NCAA tournament appearances in the modern era of the tournament (since the field expanded in 1964).

Virginia Tech is a football-first school that hasn't seen much success on the hardwood. They lack a natural recruiting territory in western Virginia and have a tough ACC conference schedule to battle through. It is easily one of the most difficult jobs in major conference basketball.

Wright seems happy and secure with his situation at the present. He wasn't interested in the Maryland job when it came open last summer, so it would be a tremendous shock if the coach were to leave the Main Line for an ACC school that wasn't as well-situated.