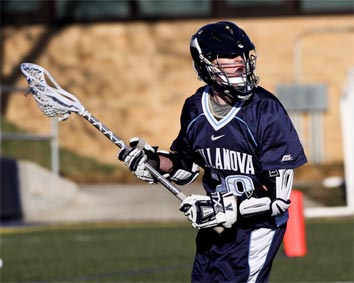 With the NCAA granting the Big East a new automatic bid for Lacrosse this season, the conference will host its first-ever tournament in the sport at Villanova Stadium. The Wildcats will be the number-2 seed in the four-team tournament and will face Syracuse in the first round at 7:00pm. In their last meeting, the 'Cats took home a narrow 11-10 victory over the Orange, the first ever loss for 'Cuse in conference play.

Villanova's record dropped to 8-6 over the weekend as they closed the regular season with a loss on the road to Providence, 15-11. It was the first-ever Big East victory for the Friars. 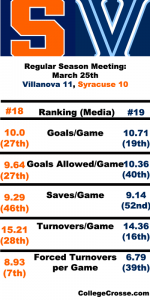 Villanova has had one of the nation's most potent offenses this season, but has struggled on the defensive end, which has landed the #19 Wildcats firmly on the NCAA Tournament bubble — just like their first-round opponent. The winner of this semifinal game may earn an at-large bid to the tournament, but more-likely would have to also beat the winner of the Notre Dame/St. John's match-up at 4:30pm to secure an invitation.

Preseason and Postseason Big East Offensive Player of the Year, Kevin Cunningham leads the 'Nova offense with 41 points on 20 goals and 21 assists. Will Casertano and C.J. Small have also added 36 and 31 points respectively. The offense in total has averaged 10.71 goals per game, with a .638 shot n goal percentage.

Junior Jack Rice led the way for the offense in this season's trip to the Carrier Dome, however. The talented attackman had two goals and two assists in that contest while Cunningham had three assists in the contest.

Thomas Croonquist serves as the face-off specialist for the Wildcats, posting a .605 win percentage from the X (130-of-215), this season.

The Orange have gone through three goalkeepers on the season, which contributed to their slow start. Bobby Wardwell is likely to get the start against Villanova, and he has averaged 9.60 goals against and a .500 save percentage. Close defensemen, David Hamlin, Brandon Mullins and Steve Ianzito combined for 49 ground balls and 27 caused turnovers this season, while defensemen Brian Megill posted 50 ground balls and 32 caused turnovers in the Orange backfield.

The Orange have averaged 10.00 goals per game on offense, and should be able to keep up with the Wildcats' scoring pace as they did in the previous meeting. Tommy Palasek leads them with 41 points, though 19 goals and 22 assists, while Derek Maltz (26 goals, 6 assists) and JoJo Marasco (12 goals, 17 assists) have contributed 32 and 29 points respectively.

Goalkeeper Dan Gutierrez has started every game this season for the Wildcats, through 14 games. He has posted a 10.09 goals against average and a .479 save percentage.

As has been the case this season, the offense is likely to get the ball into the back of the net in this game. The Villanova offensive style of ball movement and misdirection has been extremely effective at running up a good score. The aggressive attack has been potent, but the 'Cats need to get started early and score often to keep most opponents at bay.

Defensively, the Wildcats have been somewhat mediocre this season. Opponents will get opportunities to score, and that will be no different in this contest.

Syracuse will try to neutralize Villanova's scorers by, "sliding early, increasing communication between defenders and keeping them from getting any easy looks at the goal," according to the Daily Orange. They will have to try and get things together quickly, however, because the Villanova offense tends to do much of its scoring early in games.

The winner will take on the winner of #2 Notre Dame vs. St. John's. on Saturday. Notre Dame is currently on a 10-game winning streak and holds the number-2 ranking in the nation, while St. John's pulled off an upset over Georgetown to eliminate the Hoyas and secure the 4th-seed.