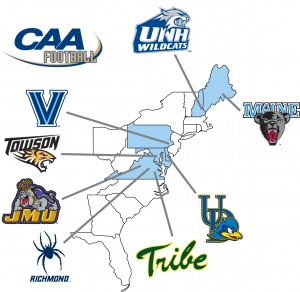 Butler University announced its move to the Atlantic-10 conference officially on Wednesday, and many reports have George Mason and VCU from the CAA following closely behind. If that happens — or even if it doesn't — Old Dominion could also exit the CAA to move to Conference USA or another home. Those moves would leave the cupboard mighty bare for the CAA football members.

According to Lenn Robins in the New York Post, a number of the remaining football members of the CAA are considering forming a new conference. The league would consist of, "programs poised to upgrade from FCS to FBS status," according to Robbins. The move is being seriously discussed according to his sources, but could be expedited if the CAA continues to lose members to other conferences.

Delaware, New Hampshire and Richmond were named specifically in the report, but other CAA members would potentially be involved. It would be hard to believe JMU would be left behind in such a move. The schools have apparently had intense conversations on the matter recently and would seek out new partners to join them in forming the league.

The league itself would likely take on a new name, but could be a continuation of the CAA Football's current corporate form, which is separate from the basketball and olympic sports conference. Those discussions may have been what league commissioner Tom Yeager was talking about in an April 10th statement regarding Georgia State's decision to join the Sun Belt.

"Georgia State’s withdrawal from the CAA and CAA football is predicated on the university’s desire to reclassify to FBS football which requires membership in an FBS league," Yeager said. "We’ve been aware that GSU was having discussions with the Sun Belt Conference as the CAA could not accommodate that desire within GSU’s time frame."

That leaves two options for the CAA: (1) Find 8 FBS schools that are willing to join the new conference, or (2) petition the NCAA for an exception or a change to the rules.

The seeming demise of the WAC will likely leave Idaho and maybe New Mexico State universities without a home for football. UMass also risks losing their place in the MAC if that conference decides to return to 12 members now that Temple has left them. If the new Eastern League were able to secure those three FBS schools, however, they would still be 5 members short of an FBS conference — so an NCAA petition would seem like the only choice.

That makes it unclear if this new league could even become an FBS conference. It could certainly become a football-first FCS league, but an NCAA approval to move so many FCS schools up a subdivision may not be easy to come by.

It isn't clear at this point whether Villanova has had any serious participation in these discussions, and Robbins didn't specify which CAA members were involved. If Villanova has been involved, it has not likely reached a serious enough level to come up for board approval. The school also hasn't studied the economic impact of making such a move at this point, and the board would need to produce new revenue and expense projections before making any decisions.

It would be highly-unlikely for Villanova to pursue any move that would require the school to also leave the Big East conference in other sports. The school would also not pursue any moves that would not be sufficiently supported by revenue streams or increased donations.

Update: Per HamptonRoads.com: "ODU and fellow CAA members Delaware and James Madison were approached at the Final Four last month about a possible move to C-USA, a source within the conference said." Old Dominion remains undecided on whether to move conferences and reclassify to FBS.

Update 5/4: Delaware's athletic director has denied that they were approached about joining C-USA, "That has not happened." Delaware administrators are reportedly happy where they are, but might be prodded to make a move if their current situation in the CAA changes.

Coastal Carolina University, a state school in Conway, South Carolina, may be on the move from the Big South. Trustees there approved a motion this week to grant "authority to the President to take all actions, including making all necessary budget adjustments, relating to Coastal Carolina University's athletic conference alignment, including but not limited to withdrawing from its current conference and accepting an invitation to join a new conference. " Speculation is that CCU could be considering a move to the CAA.

EDITORS NOTE: The underlying article's headline currently references a "basketball league." Headlines are written by editors at newspapers, not by the writers, however, and they often do not fully sync with the underlying story. In this case, the story itself clearly notes that the new conference would consist of eastern FCS schools positioned or positioning for a move to FBS and does not claim that it would be a basketball-only league. It is in-fact implicit in the text of the article that the new league would sponsor football at some level.